I've always wanted to compete on a game show.

When I was younger, I was confident I would rock Wheel of Fortune and show Pat Sajak who's boss.  I wouldn't even need to buy no stinkin' vowels.  I was sure I could solve the puzzle with consonants alone.  That's right.  Confidence.   Vanna would turn just a few letters and BAM!  I'd solve the puzzle.

When Emma was a newborn, I rarely missed an episode of Family Feud.  I had big plans for my family and I to be on that show.  In my sleep deprived state, I was certain no family in the history of the Feud had ever been on the show that would be nearly as entertaining as mine.  And we'd school that other family in "famous pigs" and "things you look for in the dark."

Now, I can't get enough of The Amazing Race.  Watch out, people.  Someday, as soon as I'm done having babies and done nursing and my kids are old enough to take care of themselves, Gary and I are taking off and we'll win that million dollars.  If it's still on the air.

For now, I live vicariously through others.  And last week, a friend's husband was on Jeopardy! for two days!  I've only met him once, but the way I was rooting for him, you'd think we were life long pals.  When he won that first day, I was thrilled for him and came bounding down the stairs to announce the news to Gary. 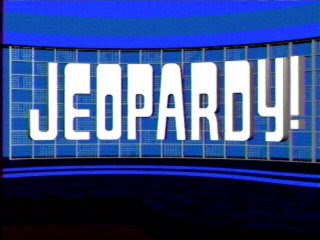 And then an odd memory came flooding back into my mind.  I'm afraid what I'm about to tell you won't support the claim I keep making that I'm not a stalker.  I am not a stalker.

But there was this one time...

Well, I loved watching Jeopardy! in high school.  One time, during the teen tournament, there was a really cute guy competing.  To this day, I remember his name.  Matt Morris.  He won.

We had our picture taken together. 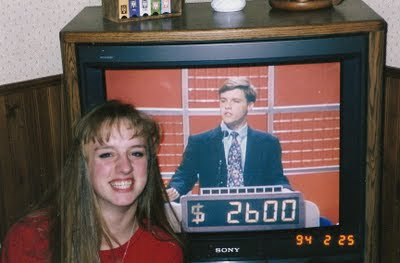 (I know... WHO DOES THAT?!  Matt Morris should just be thankful Google and Facebook weren't around then.  Just sayin'.)

But hey!  Great news!  I must've married my dream guy, because Gary competed on The Price Is Right in college!  One day, if I can figure out how to convert the video tape, I'll post his clip.  It's worth watching.  You'll have to wait and watch to see what he won!

Gary, I promise that had I seen you compete on The Price Is Right, I would've started stalking you immediately.  We would've had our picture taken together, unbeknownst to you.

(Matt Morris, if you read this, I promise I'm not a stalker.  Do not be afraid.)


UPDATE:  Matt Morris DID end up reading this!  Read this follow-up blog post.
Posted by Angie @ Flibbertigibberish on 6/09/2011