Things I should be doing to take advantage of this time:
Instead, I know I'll spend my time UNwisely reading blogs and catching up on my message boards. Seems like a waste of time, but it makes me happy! LOL 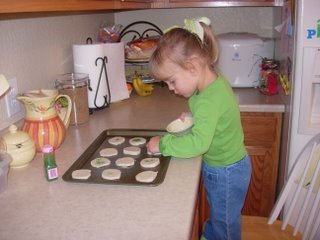 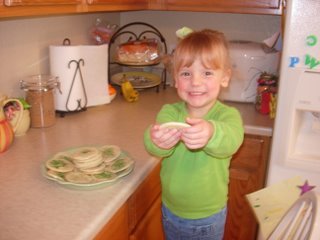 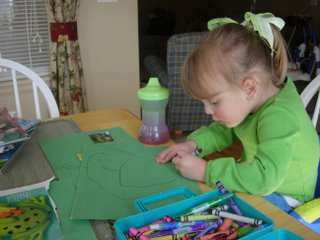 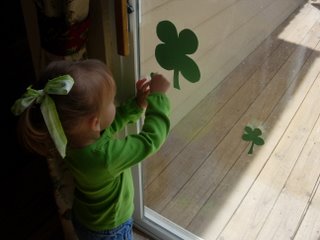 I told Emma to say "Happy St. Patrick's Day" the other day, and like she does with any other holiday, she merrily said, "Happy Day-eee!" (The "Day" part is very high-pitched.) Anyway, we celebrated the Green Day (I kept thinking of Shana all day when I told Emma it was Green Day) in fine fashion. 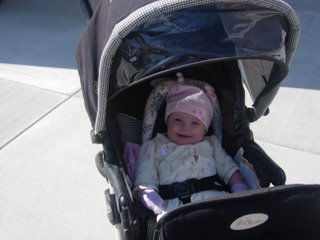 And also, today is Addie's FIVE month birthday. So here she is. What a doll.

She's getting so big and fun and smiles so easily. I adore her... maybe as much as Emma does. It's hard to say. :)

I've noticed that I'm really kind of down and out lately. I feel really "blue." I don't know that I've really understood "blue" before, but it describes how I feel. I couldn't figure it out for awhile, but I think I've figured out why I'm so low lately...

Gary was home with us for over 3 months while he was on Sabbatical. WHAT A GIFT from God! I was so apprehensive at first... he would be HOME for three months straight?! I worried about him feeling like he was on Sabbatical from everything - work, stuff at home, being a husband and dad, etc. I worried about him kicking up his feet for three months while my whirlwind household circulated around him. It wasn't that way at all. The Lord really had His hand on the last three months. I watched our marriage strengthen, his bonds with the girls grow stronger, and I noticed great changes in his demeanor and attitude. But then suddenly a couple weeks ago, he had to go back to work. It was kind of bittersweet because admittedly, it is nice to get back into some kind of rhythm and routine, but it was so nice having him home. So now I think I'm just in some kind of funk with him being gone. Having extra hands at home was so nice, and just having his company was great. Such a departure from our normal lives where we never have time together. I have to get used to him being at work again and not let myself feel so down about it. We had a luxury that not many other people can boast of, and I'm so thankful for it.

I think my funk can also be attributed to the fact that this is the time of year that I work a little bit by helping out a few days a week in a tax office until tax day is here. It wouldn't be so bad except that I'm working more than I'd bargained for. Thankfully Gary's job is flexible enough that he's able to stay home with the girls (it just means we see that much less of each other when he has to work late to make up for it). Initially my boss had asked for 2 days a week for 4 hours or so. But here I am, with 4 weeks to go, working 3 days a week for 5+ hours each time, and he's alluded to wanting more of me. Argh! The extra money is nice - it's the only reason I'm doing it - but I hate being away from my girls that much. We definitely need the extra money, and the bonus at the end is VERY generous, but it's hard. We feel like the Lord has placed this opportunity in front of us right when we needed it, so it was hard to pass up since we can make it work. There's no way I'd do it if it meant putting the girls in daycare, in fact, I think the time Gary has with them while I'm away is good for all of them. Most of the time I'm missing their naptime anyway, so they probably don't realize I'm gone as much as I am. ALL THIS TO SAY... I'm so thankful to be a SAHM. I've never taken it for granted and I realize it's a situation not everyone has available to them. I just have to keep looking at this 8-week period that I work as temporary, and see it as a sacrifice for my family at very little expense. Thanks, Lord, for giving me a hard-working, caring husband who values me as a mom, and the GIFT of being a SAHM. Enough of this tax stuff... I love my "real" job!!!
Posted by Angie @ Flibbertigibberish on 3/19/2006 No comments: