I wasn't going to get caught up in the Royal Ruckus.

I mean, sure, I peeked at the tabloids when I was at the grocery store.  And okay, I watched the Lifetime movie on TV the other night.  Well, I guess I did program my DVR to record the wedding... just in case.

Okay, I was a goner from the start.  But when you sit down to watch the Royal Wedding with two little girls, you kind of don't have a chance. 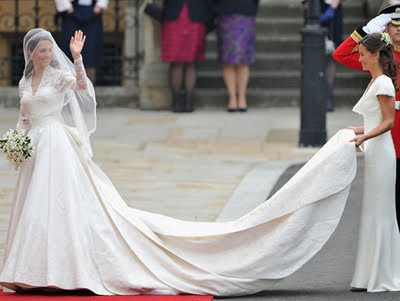 When I told the girls earlier this week that a real prince would be marrying a girl who would become a princess, they couldn't believe it.  We were eating dinner and Addie literally froze and dropped her fork just as it reached her mouth, and said, "Are you serious?  This is so... ex... CITING!!!" (Can't you picture it?)

We didn't watch the wedding live, but as we watched the recorded wedding coverage in the early hours of the morning, the girls' sleepy eyes didn't take long to light up.  We witnessed the throngs of people surrounding Buckingham Palace awaiting the first kiss (on live TV by then), and Addie turned to me, teary-eyed and said, "Oh Mommy, I wish I was there with all those people!" and Emma flatly replied, "They could've just watched it on TV."  Oh, how I laughed!  Although they were both glued to the festivities, they couldn't be more different. 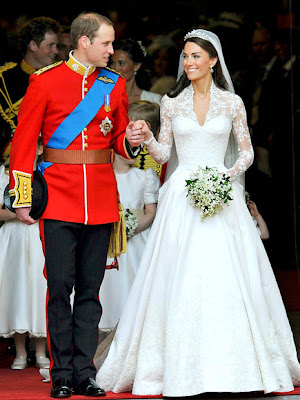 I wasn't going to get caught up in it.  I certainly didn't ever intend to blog a single word about it.  But I'm sitting here tonight watching it again (I know, I know!) and can't get enough.


the flags
the beautiful (and sometimes ridiculous) hats
the feathers
the pomp and pageantry
the accents
the waving
the music
the bells
the uniforms
the curtsies
the carriage!
And the DRESS!  Her dress... was absolutely gorgeous.  I loved watching Kate and Pippa interact.  I also loved when Prince Harry took a sneak peek at Kate walking down the aisle and grinned at William and whispered something.   I think Kate is just darling, and she and Prince William really seem to love each other and be best friends. 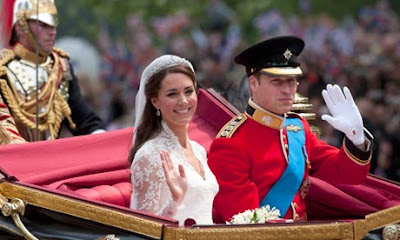 But more than all of the perfect details, it's a beautiful story.  Kate Middleton is the first commoner in 350 years to marry a future king.  She entered Westminster Abbey a woman like me and left as royalty.  Isn't that like every princess movie ever made?  I love that it's given my girls the chance to dream.  (After thinking it through out loud, Addie sadly figured out that Harry will probably be married by the time she's old enough to marry.)

How lucky are we who know the Lord to be in the same boat?  I've been plucked from my ordinary life by the King of Kings, so that I might be live a life of royalty as His daughter.  I might not get whisked away in a carriage every day, and I might have to do my own laundry and cook my own meals, but I know hope and grace and joy that no royal wedding can match.  And besides, I married Gary, who is WAY cuter than Prince William anyway. 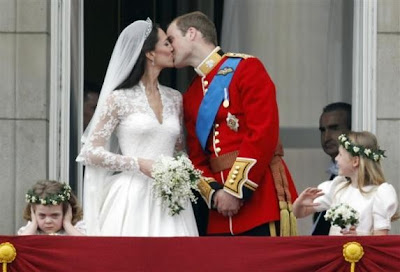 And did you catch that little girl in the lefthand corner? Oh, what a riot!  I was so distracted by the royal smooching that I didn't notice until later.  I hope her mum thinks it's as cute as I do.

Gary's out of town right now, so I won't be deleting the wedding from the DVR until he can watch it.  I know he'd be absolutely crushed if he didn't get a chance to watch it in its 6 hour entirety.  Until then, cheerio! 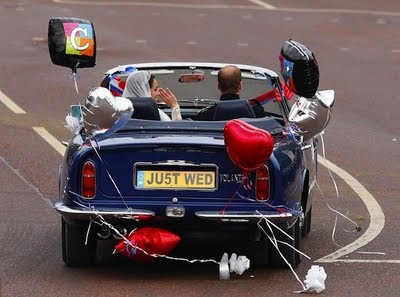