No cow parts were used in this event

...much to my dismay. Because, don't even think I wasn't scouring the town for some Rocky Mountain Oysters. And no, local grocery stores, you don't need to refer me to the seafood department, thankyouverymuch.

This weekend was so. much. fun. I hope all the participants had as much fun as Gary and I did, because there were a few moments during the race when I thought I might have several fewer friends than when I started.

To recap, Gary and I planned last Saturday's MOPS & POPS event, which is an activity where the moms in my MOPS (Mothers of Preschoolers) group bring their hubbys for a night (or day!) of fun with other couples. Last year we planned the first ever MOPS Amazing Race and were recruited to plan it again this year. We learned a few things from last year, so after a few tweaks here and there, this year's race was longer (but maybe too long) and more challenging (but maybe too challenging). But at least this year no one had to wax any body parts.

So here's the low-down. This could get lengthy, so grab a Rocky Mountain Oyster and get comfy.

We had about 20 couples participating, and split them into 8 teams. We met at our Mentor Mom's house and after I explained the rules and stressed the "no cheating" rule for certain competitors (Chip and Mike), the game began!

1 - Each team was assigned a color and all but one team member was blindfolded. Each team stood on the perimeter of a 20-30 foot wide circle, inside which 6 stakes of each color were scattered. When I shouted "go," callers had to direct his/her teammates to all of their colored stakes. The trick was that all 8 teams were shouting directions and picking up stakes all at once. When all stakes were picked up, they could get their first clue. 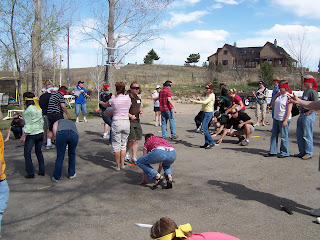 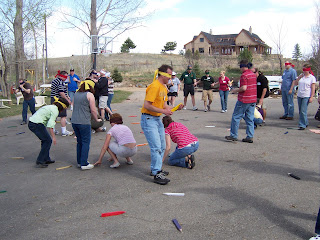 2 - The first clue sent them to the University of Colorado football stadium. Here's where we encountered a minor problem. The clue sent them to a specific seat in the stadium, where we counted on the (free) spring game to just be concluding, thus there would be no problem getting into the stadium. However, the game ended earlier than we hoped, and by the time teams got there, they were locking the doors! So, Gary had to scramble to find teams as they arrived to give them the next clue. It all worked out, but this part didn't go as smoothly as we hoped! 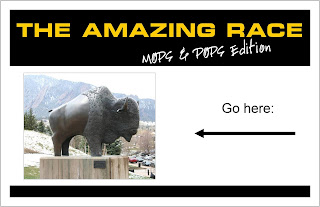 It sent them to a place on the CU campus where I was set up with the food challenge portion of the game. Each team had to solve ONE SIDE of a Rubik's cube. The color they solved corresponded with what food they had to eat: 1/2 sleeve of saltine crackers, about 20-30 Rolos, 1 can of "potted meat" (I had requests not to repeat last year's Spam so I didn't... don't they just WISH it had only been Spam!), 3 "extreme hot" chili peppers, 2 sardines, or 1 pickled pig's foot. To my delight, each of these food delicacies had takers. What a wonderful day. After the food was eaten, they received their next clue. 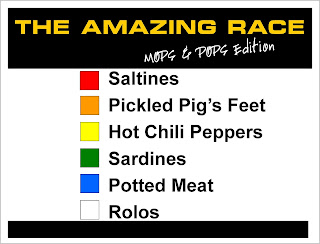 Here's Mike, the brave, pig's foot eating soul (Nancye, did you kiss him after that?): 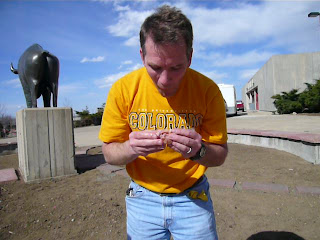 4 - The next clue sent them to Chautauqua (a local park/hiking area) where they had to hike part way up a trail to the first trail marker. There they found rocks with letters in many colors. They had to find the rocks in their team color - seven total - and unscramble them to come up with their next destination: THE SINK. (The Sink is a local restaurant, so those unfamiliar with the area might have been at a disadvantage. One team deciphered it - "HIKE N. ST." and they would've been hiking a looong time had they not gotten a little help.)

5 - At The Sink, they were asked a trivia question based on the graffiti inside the entrance of the restaurant. The restaurant is partially known for the graffiti that covers the walls and ceiling of every room.

6 - After the right answer was given, they were sent to the Boulder Public Library where they were faced with 3 locked boxes containing their next clue. They had to sort through 3,000 keys to find one that would unlock the box so that they could move on. (Edited on 4/22/08 to add that I learned today that there were cheaters at this point in the game too. Tsk, tsk!) 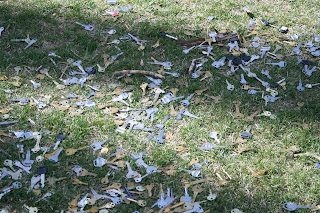 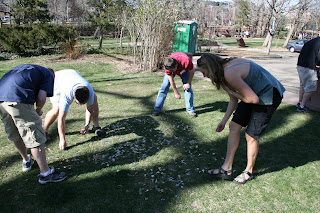 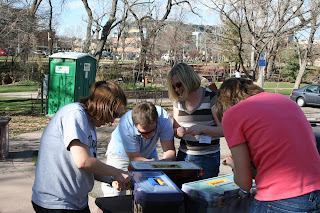 Side note: I had this idea a few weeks ago and went to a local hardware store to get any extra keys they might have from key duplicating. I was thrilled when they gave me about 30. Before I could go to my next store to collect more keys, Gary mocked me and told me he had about 3,000 if I wanted to use them. Whatever. I would've gotten that many.

7 - The clue found in the locked box sent them to Pearl Street Mall (an outdoor mall at least 3 blocks long) where they had to count the number of park benches on the mall and report the right answer to a certain bystander to get the next clue.

8 - That clue sent them to the intersection of 17th and Boulder Creek. Here, they were faced with a "DETOUR." 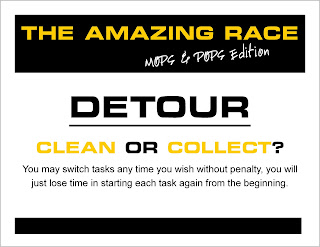 According to the TV show "The Amazing Race", a detour is when teams are faced with the choice of two challenges. In our game, they chose between "Clean" or "Collect." In "Clean," teams had to fill a trash bag with trash from the banks of the Boulder Creek. I suppose if I do it again, I'll have to specify that taking trash FROM TRASH CANS is cheating. You know who you are, you big cheaters! In "Collect," teams had to go door-to-door and collect 5 pairs of tennis shoes which we'll donate to Nike's recycling program in which they use old shoes to make new playground surfaces. Once these tasks were completed, they received their next clue. 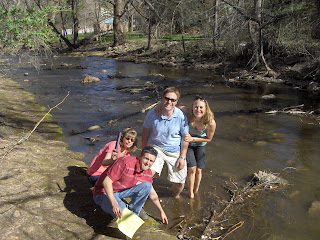 9 - Their next clue sent them across the street to Boulder High School where they had to dig in the volleyball pit sand for their color-coded clue. It's 1,000% likely that we'll scrap this task in the future. This is where I began losing friends. It wasn't just one court, it was two. And the clues were all spread out. And there were people playing volleyball. Basically, it wasn't pretty, and half of the teams gave up and used their one freebie call to find out where they should go next. So, it wasn't a good challenge, but I have to admit that I got a good laugh out of it. Sorry, friends!

10 - The next destination was a coffee shop. They had to ask the counter for their clue (some went to the wrong coffee shop at first because the clue didn't tell you directly where to go) and in their envelope they found money to buy drinks and a word search puzzle. The word search was filled with (mostly) Boulder related words, and the leftover letters told them their next destination: THE APPLE STORE. 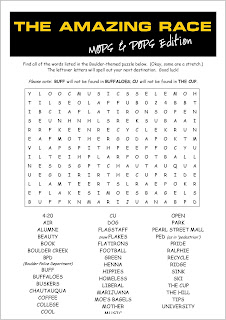 11 - Teams scurried to The Apple Store (or one team went to "The Apples to REI", apparently they got a faulty puzzle and this clue made sense to them... but we won't go there). My sister was waiting in front of the Apple store where they were instructed to go inside and visit: http://www.amazingracemops.blogspot.com/. I'm laughing as I type this, because the game took a hilarious turn at this point. Well, hilarious to me, maybe not to those wandering around the 29th Street mall. I won't totally give the clue away (where they had to find him is ON THAT PAGE, I promise. Look hard), but they had to find that guy...

12 - ...and he was in Borders. Once they found him, they were sent to the church where they had to either launch an egg with a balloon launcher past a certain point and catch it without it breaking or toss 4 (was it 4?) eggs a considerable distance and have team members catch them without them breaking. Two words: Mes-sy.

13 - After completing that task, they were given their next clue which led them to Scott Carpenter Park where they had to climb a very narrow rocket to the very top to retrieve their next clue. I wish I could've seen them do it, because all I know is that this usually-thin-but-now-pregnant-girl had a rough time getting up there.

14 - That clue sent them to a Park-n-Ride garage with 5 (?) floors. They were told to find license plate 302-DIT for their next clue. I received several calls asking if the car had left since they couldn't find it, but no, the license plate was never ON a car. I had it leaning against a wall with the clues tucked behind it. Good times. 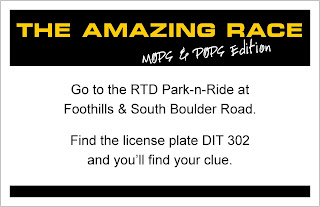 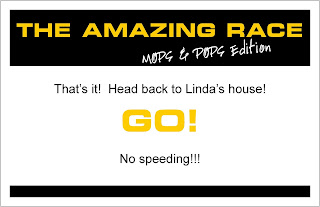 15 - So that was the final clue, instructing them to get back to our original meeting spot, where we concluded with meatball sandwiches and an awards ceremony. It was SO FUN. The food was great and the prizes were awesome! Thanks, local sponsors! Every team walked away with a prize/certificate worth at least $10-$100. 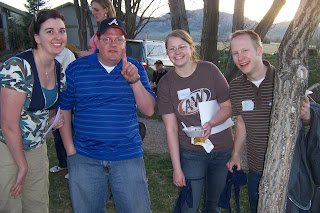 A really nice couple posing with some cheaters: 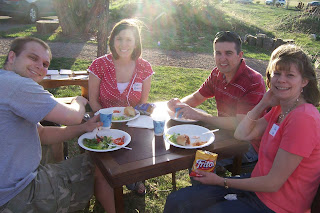 (As an extra way to shave minutes off of the final time even if team's didn't arrive first, there was a list of challenges they could do to earn time. So that explains some of the random pictures.) 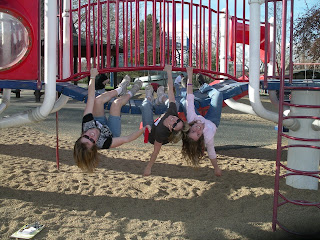 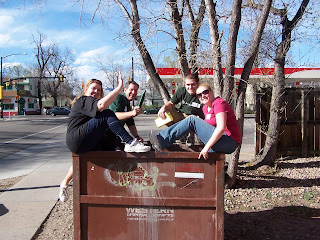 Thanks for hanging in there this long if you're still reading! We've already had requests for the 3rd Amazing Race, so I know it was a success. Thanks to all who participated.