The sincerity and beauty and touching moments from yesterday's post will seem a thing of the past after you're done reading what I'm about to write. I almost feel like I'm betraying the feelings behind that post, but I assure you, it's just a true reflection of my life. It seems like ever since losing Joshua, one moment can be filled with sorrow and the next I can be laughing hysterically. What a great God we have to allow us to have such a range of emotions. (Or maybe I'm just pregnant. Wait. I am.)

So like I said yesterday, I'm pulling pictures off of my camera, and I ran across this: 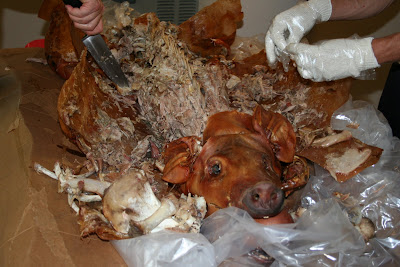 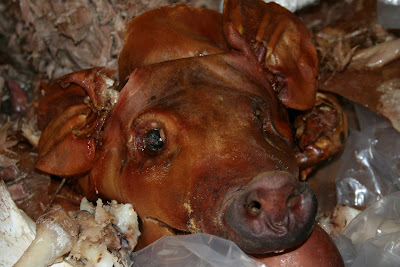 And it reminded me of a story I MUST share with you.

It's okay if you're grossed out. Just wait. It will get worse (but be thankful I don't have pictures of "worse").

That picture is from a couple of weeks ago. Gary and his team threw the annual bash for our graduating seniors, and the theme this year was a luau. And no luau would be complete without a pig, right? My girls walked in and saw the pig and were NOT grossed out, I'm happy to report. Emma's concerns were that his bones were showing and that he died eating an apple.

Well, nine years ago - the inaugural year for the "Senior Send-Off" - we celebrated with a luau as well. A kid in the group suggested we have a luau and roast a pig underground. We did a little research and decided it was totally doable.

Oh, I wish I could get those pictures of us ("us" being Gary and some of the kids - not me) digging that hole behind the church, burying the pig and dancing around the bonfire on top. It was like a scene from "Lord of the Flies" and it felt so dangerous. After we were certain that the ground was hot enough to cook this pig, the fire died down and we waited. After honeymooning in Kauai 9 months before, we were eager to taste the pork that was certain to fall off that pig's bones. There is no meat like pork from a luau pig.

Now, I might have some of the details a little off. This part of the story is a little hazy to me. I'd ask Gary, but I think it's best some wounds just remain unopened. When we dug up the pig a day or two later and found it was cold, Gary was totally discouraged. After some quick thinking, we changed gears and grilled the usual. The luau didn't seem so luau-y with hot dogs and hamburgers, but it certainly beat cold, undercooked pork.

The problem became what to DO with the pig that had been rotting underground. Well, at the time, the church sat on a bunch of land, without neighbors close by. Unless you count that little house that that nice couple on staff lived in behind the church. With their dog. There was that house. And I guess it was only about 50 yards from where we ended up burying the pig. But surely that wouldn't prove to be a problem. So it was in the aforementioned hole that Gary and friends reburied the pig, and called it a day.

Or so Gary thought.

Later that night we got a call from the pastor who lived in that little house. You know, the one behind the church. It turns out their dog was really sick. Puking, in fact. It seems that she had dug up a pig that was buried behind their house. Huh! How'd that get there? He requested that Gary come bury the pig... again.

Thus begins our first fight. Nine months into our sweet little marriage, and the honeymoon was over.

After a long day, Gary got that message and said, "Well, his dog dug it up, he can go bury it!"

Being the compassionate wife I am, I heard the message, noted my husband's long day and weary demeanor and said, "You clearly didn't bury it deep enough! The poor dog is going to die! You go bury that pig!!!"

Being a newlywed, I was surprised - no, stunned - that he didn't gaze lovingly into my eyes and admit that I was right. I was amazed - no, astounded - that he didn't drop what he was doing and leave right then to get on the task and bring me back some ice cream in return for showing him the right thing to do.

Instead, a hefty little argument ensued. Obviously, we were both right.

In the end, after stating my opinion on the matter LOUD and clear, I announced that I was going grocery shopping. I slammed the door to our apartment and left.

I can't remember how long I was gone, and I can't tell you a thing I bought at the store that night. But I can remember one thing as vividly as if this happened yesterday: I passed Gary walking to the church on my way home from the store. We had one car back then, and I had it. I remember feeling a rush of mixed emotions - regret that he was having to walk all the way to the church, and relief that he was going back to the church to do what, in my opinion, was the right thing. I'm sure he was cussing me out the whole way there! (And no, I didn't consider turning around to give him a ride. Sorry, sweets!)

I didn't wait up for him that night; I watched the late news and went to bed. But it turns out that the dog had done quite a number on the pig. Gary buried the body deep into the ground and covered the area to mask any other dogs or animals from smelling it. Then he wrapped the pig's head in, like, 57 trash bags and put it in the dumpster. (Ironically, the kid who instigated this whole thing was into dumpster diving years later - imagine the surprise when someone found THAT treasure!) Gary said he gagged the whole time and that it was the grossest thing he's ever done.

But I didn't learn about these details until MUCH later. We woke up the next morning and not a word was said about any of it. We didn't talk about "the incident" for a long, long time after that. Maybe years, I can't remember. There were no apologies, no follow-ups, it was all just water under the bridge, I guess. Probably not a super healthy way to deal with it. The funny thing is, within the week - maybe the next day, like I said, I can't remember all the details now - our senior pastor invited us over for dinner and served... pork! Gary couldn't eat it and I was groaning inside, knowing it was churning up bad feelings.

All these years later, we laugh about the story. And most of our friends know about "the pig" and our first fight or have at least heard the legend. Maybe Gary will come out of bloggy lurkdom to correct some of my hazy details, but I'm confident he'll get a kick out of this little walk down memory lane and it won't start another swine skirmish. Will we try to roast a pig underground again? Highly unlikely. Unless we're living in Hawaii, and then anything is possible.

A little note... Gary came in as I was writing this and asked what I was blogging about. I told him "The pig." He said, "Pig?" I nodded and his expression changed and with a twinkle in his eye, he said, "THE pig?" Yes, we share such fond memories of THE pig. May his head rest in peace.
Posted by Angie @ Flibbertigibberish on 6/05/2008