Gary and I took the college group to the Chris Tomlin/Louie Giglio concert last night. It was AMAZING. If the tour has yet to hit your town, GO. Even if you've never heard of those two guys, GO. Seriously.

Chris Tomlin was wonderful, just as I expected him to be. Several of his songs brought me to tears, just as I expected them to do. He really is just so gifted as a songwriter and singer. I found this quote by him today that really affirms to me why I'm such a fan of his music: "...God's blowing a fresh Wind of His Spirit in so many people who are coming to realize that anything that just builds us up as people isn't worth much. What gives God the spotlight is important. And that's all we're about." Awesome. 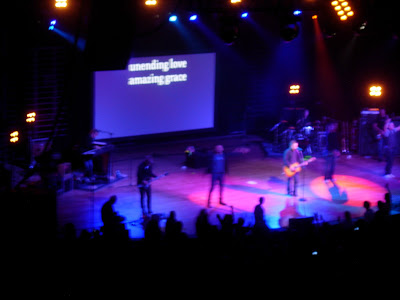 Before I go on, I love - LOVE - that the words to the songs were up during the entire concert and nearly everyone was singing along. I love that. It wasn't as much a concert as it was a giant, awesome worship service. At one point EVERYONE below (we were in the balcony) was jumping simultaneously and singing and it was just amazing to see. I laughed to myself, trying to imagine Boyz II Men displaying the words to their songs during a concert so everyone could sing along. Funny. (Boyz II Men? WHAT? I had to throw that in. Someone laughed at me the other day when they learned that I'd gone to a Boyz II Men concert. Yes, I did. Boyz II Men. I know, funny, huh?)

Anyway, midway through the concert, Louie got up to share a message with us. Okay, this is where I should just stop. I'm about to summarize it, and it is SO not going to do justice to it. I feel like I have to though, because I don't want to forget it, and it was amazing. I've decided I might get the DVD. So this is it in a nutshell. But don't take my word for it - try to get a hold of the DVD if you can. I'll even let you borrow mine!

So, in a nutshell, here we go. Louie said that all God had to do was say the word, and he created the entire world. Galaxies, stars, planets, humans, animals... BAM! That's power. He held up a golf ball to illustrate the size of the earth in comparison to larger things in the universe. For example, if the earth is the size of a golf ball, the sun is 15 feet across. What a great visual! He then went on to talk about the sizes of three other stars (and I'm sorry, I don't remember their names). If the earth is the size of a golf ball, one is SIX Empire State Buildings end to end. One is the length of two Golden Gate Bridges put together. The largest star found is Canis Majoris, and get this - if you put the earth at sea level, Canis Marjoris is the height of Mt. Everest from sea level to the top! WOW. I think the earth is pretty darn big. That makes me feel so very small.

After showing us how grand the universe is and the amazing wonders that God created for his own glory (have you seen the core of the Whirlpool Galaxy? It's a cross. So cool. You should Google it.), he told us that we're nothing. It's true! We're born, we live for a short time, we die. We're tiny and virtually unnoticed in our universe. "As for man, his days are like grass, he flourishes like a flower of the field; the wind blows over it and it is gone, and its place remembers it no more." (Psalm 103:15) And yet, we were made intentionally by the Creator of the universe. How cool is that!? He showed us a few cells that are the meager beginnings of a human. And in the part of the night that shook me the most, he showed a five month old baby in utero and explained how amazing it is that this baby is fully formed and perfect just by a bunch of cells doing their thing. I mean, truly, life is such a miracle. In his grand finale, he explained to us what a molecular biologist shared with him at the end of one of his talks last year. Our bodies are held together by a protein called laminin. It's what helps hold our skin to our muscles and our muscles to our bones. You know how all of those super smart science people know how to draw protein structures and all that? (Can you tell I hardly know what I'm talking about?) Well, laminin doesn't resemble some crazy Tinker Toy creation, it's the shape of a cross! I literally heard gasps across the room when he told us that. He showed us an actual microscopic picture of laminin, and sure enough, it's a cross. And it hold us together. God is so cool.

Anyway, it was an emotional night full of ups and downs, but I left feeling full and in awe of our God. He loves us. He cares about what happens to us. Even in our darkest days when the pit seems too deep, he's holding us together and will see us through until the end. Of all the amazing, beautiful places in our universe, God chose to send Jesus to earth. To us. FOR us. He totally didn't have to and he did. How great is our God!
Posted by Angie @ Flibbertigibberish on 11/09/2007