A brush with the law

Let me tell you a little story...
Once upon a time, when I was four years old, I shoplifted. I remember it as clearly as if it had happened yesterday. I was at K-Mart with my mom and little sister and somehow pocketed a small, plastic cow. I remember it looking something like this.

I don't know why I needed the cow or if I knew I'd be in trouble, but I know that the cow found a new home that day. Maybe I thought I was being noble and rescuing it from certain damaged-goods-death at K-Mart. After all, the poor cow was all alone. Whatever set he had come from, whatever tag had once been placed on him, he was forgotten and lonely. I can make this sound as flowery as I want, but the bottom line is: I stole the cow.

I vividly remember pulling that cow out at lunch time while my sister and I sat in the booth in the kitchen waiting for mom to make us lunch. (Yes, we had a BOOTH in our kitchen. How cool is that?!) As soon as my mom saw it, the jig was up. She knew it didn't belong to me and figured out that I'd utilized the good ol' five finger discount. Here's the part of the story that's most clear to me - she took me straight back to K-Mart and had me apologize to the clerk at the customer service desk for taking that cow. I remember being embarrassed and taking to heart that it was the WRONG thing to do. I've thought back on that many times since then and admire what my mom did.

Okay. Fast forward roughly 26 years. You guessed it. Emma shoplifted today. She'll be four next Monday. Oh, the irony! We were at Hobby Lobby today and she asked if she could have this cheap little $.99 tape measure that was calling to her in the checkout. 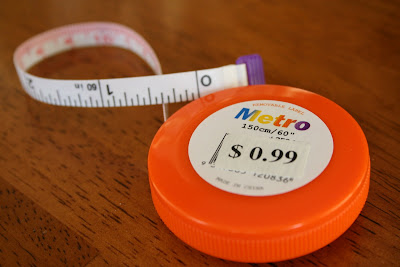 I said no, and asked her to put it back. I watched her put it back, but in the busyness of checking out, she was able to go get it and quietly put it in her pocket without me noticing. A couple of errands later, I heard a click-click-click-click-SNAP! from the backseat. I turned around to see her playing with the stupid tape measure! I was furious. Not only had I told her no, she TOOK it. As soon as we got home Gary and I had a little chat with her. We didn't want to scare her, but we let her know that when some people steal things, they go to jail. She asked, "Do I get to go to jail?" So the scare tactic didn't work. I left Addie with Gary and off we went, back to Hobby Lobby.

Before we left, she announced that she was tired and wanted to take a nap. Folks, this is the first time in her short little life she's admitted to being tired. Coincidence? I think not.

We got in the car and took a silent drive to Hobby Lobby. On the way, I called my mom for a little reinforcement, which only brought me to tears. After I got off the phone, all Emma said was, "But Mommy I need this tape measure."

We stood in a very long line at Hobby Lobby, and I could see her wheels turning during our whole wait. She told me she only wanted to talk to a girl, which was too bad since we were in a "boy's" line. She pointed out where she got it and said she could just put it back and "that will be okay, Mommy." I said "no" as I tried to imagine how she'd look like in black and white stripes.

Eventually we got to the front of the line. I admit that I'm disappointed that the clerk was a teenage boy who really didn't get the gist of what I was doing and the lesson I was trying to teach her. I told him we'd been in earlier and that Emma had taken the tape measure, and that we had come back so that Emma could make things right. Emma promptly handed over her treasure and said, "I'm sorry I took this." He hardly looked at her, but looked at me with a clueless look and said, "Um, okay." I guess I was hoping for a sweet old lady who would deal with Emma with just the right amount of correction and gentleness. Oh well.

We were barely out the door, Emma skipping and be-bopping by my side, when she looked up at me with sparkling eyes and said, "Mommy! I'm not tired anymore!" Oh! Imagine that!

When we got back to the car, I looked straight into her eyes and thanked her for apologizing to the man at the store. I told her that was the right thing to do and that God would be proud of her for doing the right thing after making a bad decision like that. My frustration is that she just took the whole thing so lightly. She spent some time in her room when we got home, but I think the whole incident was long forgotten by then. I really need to be seeking out answers and ways I can teach my kids the difference between right and wrong, and how to make them more sensitive and remorseful when they choose wrong.

In the meantime, I guess I'll start saving up for when we'll be posting bail.

And okay, yes. I took a picture of the tape measure. And yes, my first thought when I realized what she'd done was, "Oh, this will be a great story for my blog!" Is that wrong? :)
Posted by Angie @ Flibbertigibberish on 10/29/2007