Okay, you guys.  Brace yourself for something totally mind blowing.
Well, maybe not mind blowing.  Amazing?  We'll go with amazing.
We were in Florida last week.
We went at the same time last year and had a fun time walking the beach and finding a seashell here and there.  But this year?  Word on the street (er, poolside) was that Tropical Storm Sean churned up the ocean enough to cover the beaches with seashells. 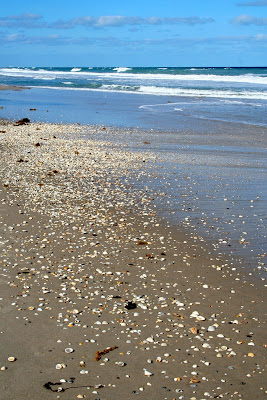 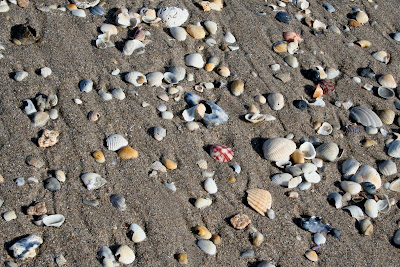 And I mean, COVER. 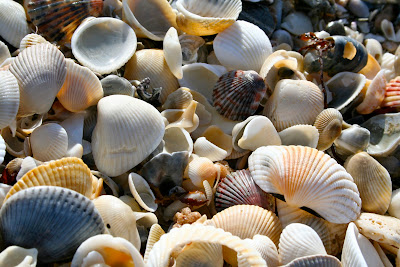 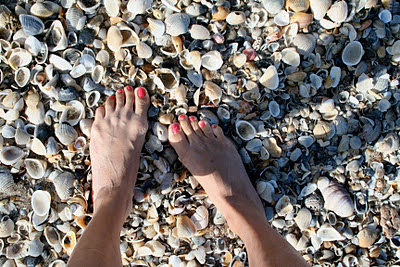 There were stretches of beach where sand wasn't even visible.  It was all shells.
This land locked Colorado girl has never seen anything like it.  I was so tickled!
I began exclaiming my excitement to Gary and squealing with delight.
(I'm not exaggerating.)  The more I saw the thousands of shells on the beach
and studied each one I picked up, I couldn't help but wonder... 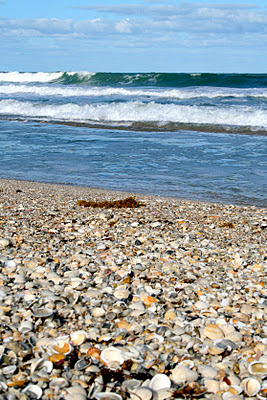 Why aren't people
talking about shells?!? 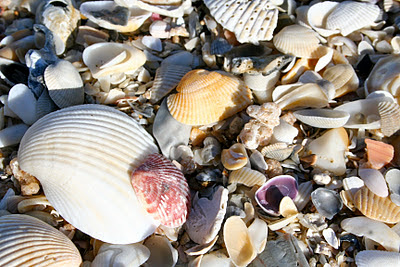 Shells are amazing!  They're beautiful!
I was giddy at the thought that Gary and I were the first humans EVER
to lay our eyes on some of these shells.  We were modern day explorers!!!
Move over, Ponce de Leon!
I half-expected to see news helicopters hovering overhead. 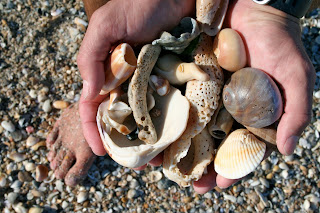 Can you sense my excitement?
I turned to Gary and said,
"Isn't this AMAZING?!"
He shrugged and said, "Yeah."
Yeah?  Flat, monotone, YEAH.
I guess he just couldn't match my level of excitement.
"This is EXCITING, Gar-Bear!  Get excited!"
And with that, he did a cartwheel.

I laughed so hard. 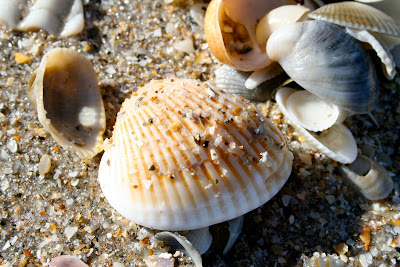 But seriously, let's talk about seashells.
I had lots of questions and I needed answers. 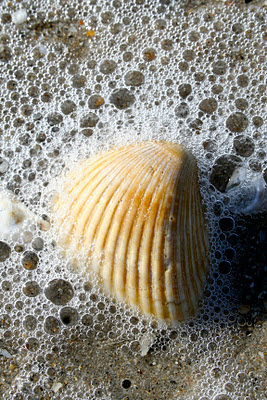 Did you know shells are a creature's exoskeleton?
I didn't know that.  I mean, I knew crabs walked around finding shells to occupy,
but I didn't know they were actually once part of a snail's body.
The shell is what remains after the snail dies.
My friends and I conjectured that maybe shells were made of their poop.
They're not. 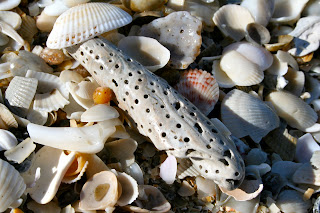 Did you know that those really big, beautiful shells you find in gift shops
and airports are actually harvested, which means that the creature inside is killed?
By the time most naturally abandoned shells make it to the shore,
they're usually broken in pieces. 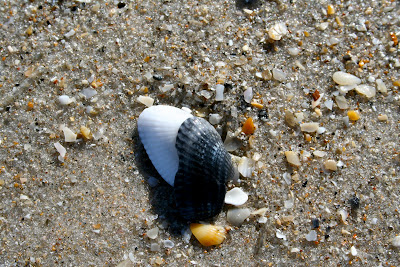 Did you know it's not illegal to take shells from Florida beaches
unless they're still "alive?"  It's true.
But one shell I brought home had a little stowaway inside.  Oops.  And yuck. 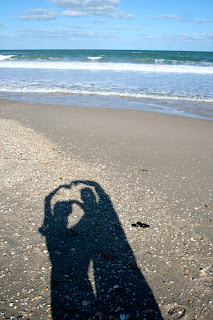 Sanibel Island is known as the seashell capital of the world.
It's on the gulf side of Florida.  I'd love to go there sometime. 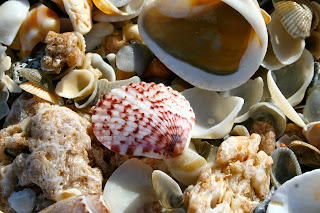 Like all the beachcombers I spied on the beach, I was taken by these little beauties and couldn't resist.  I came home with quite a seashell bounty.  Wanna see?
First I'll show you the largest and smallest shells I found,
in comparison with a penny that I also found on the beach: 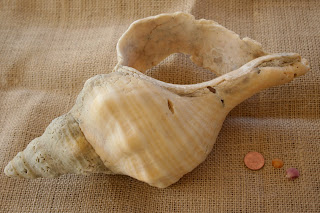 I KNOW!!!  Can you believe it?  That sucker is HUGE!  The pointy part in the bottom left side of the picture was sticking out of the sand next to a little reef that was exposed at low tide.  I wiggled it a little and pulled out this enormous shell!  I was shocked! 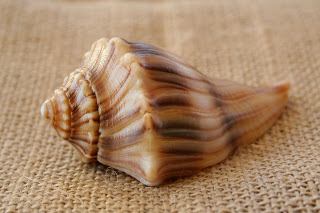 This little cutie is about the size of my entire palm and literally washed up on my feet.
I'm pretty much the Shell Whisperer. 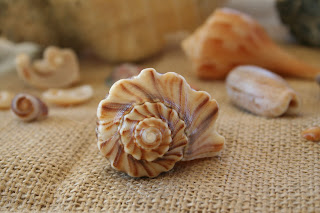 I love that spiral! 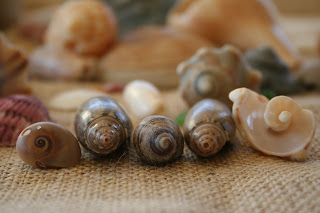 I was curious how that spiral forms so I googled it.
Basically...

Seashells are created by snails. When snails are first born, their skins are soft, then they harden and calcify and detach from the rest of the body. They continuously grow around their own shells more and more, which is where the spiral comes from. When the snails die, the soft portion decays and the hard shell remains.
Some shells are also those of clams, scallops, or oysters. Depending on the location, any of these might be more numerous than the shells of snails. In any case, the process of formation is similar: A soft-bodied mollusk secretes calcium carbonate which accumulates as the shell as the animal grows, then the empty shell remains when the animal dies. 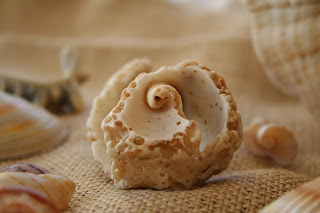 You might know that there's a mathematical explanation too...
about the golden ratio and logarithmic spirals and the
Fibonacci sequence and all that mumbo jumbo.
But quite frankly, I'm afraid of attracting the wrong kind of crowd -
there are those who might stumble upon this blog by doing a
Google search for those kinds of things.  ;)
In the end, I can't help but look at those gorgeous spirals
and think that our Creator does a magnificent job. 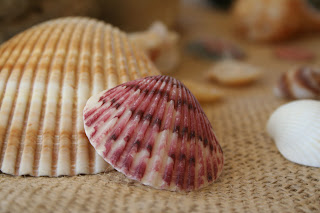 Doesn't this one look like a prop right out of
Pirates of the Caribbean? 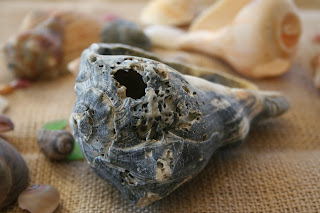 I learned that all of these type of shells are called "olive" shells.
They're the South Carolina state shell.
Do you know what Colorado's state shell is? 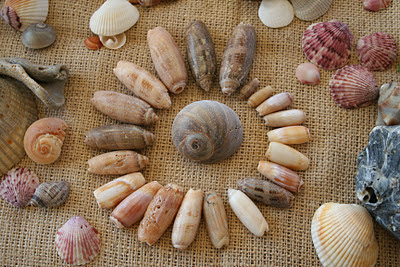 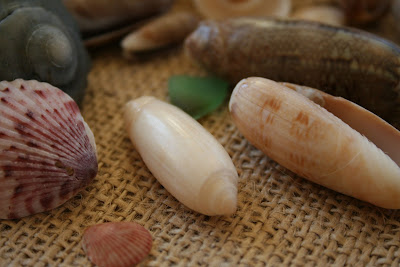 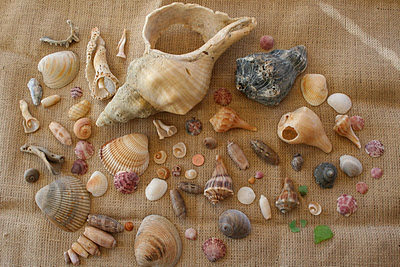 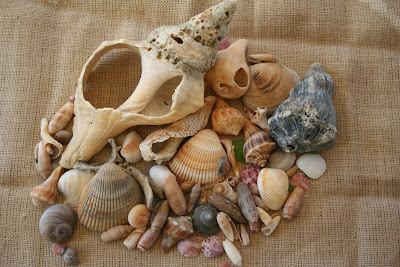 Maybe I should've majored in conchology in college.
It'd be an excuse to visit tropical places, right?
Posted by Angie @ Flibbertigibberish on 11/16/2011