Cave Girls vs. The Brodysaurus 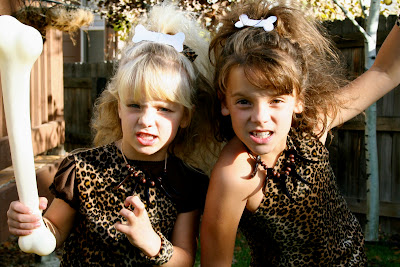 I'm a sucker for themed Halloween costumes.  I guess it runs in my blood.  One year my sister and I were a mouse and mousetrap.  Another year, all of the adults on the street I grew up on went to the town Halloween party as a dozen eggs.  Last year, my kids were all pirates and the year before they were a Wizard of Oz trio.

So this year, I threw out a few ideas to my kids.  They immediately loved the cave girls and dinosaur theme.  I made it clear to them that they could be whatever they wanted, that they didn't HAVE to go along with this idea, but they were more than happy to.  (And my heart did a little happy dance.) 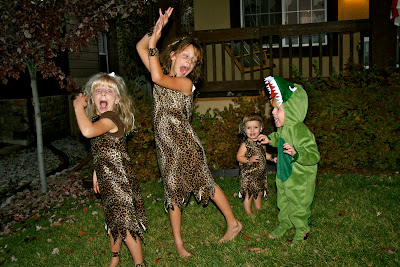 I planned to be ahead of the game and get the costumes done ahead of time (famous last words), but on Sunday afternoon on the day before Halloween, I finally did something about it.  I've always been a procrastinator!  The costumes were NOT complicated.  Seriously, even those with very little sewing experience could whip these out. 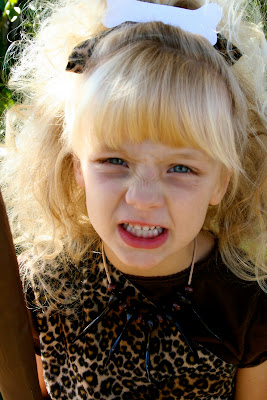 All I did was take a jumper from each of my girls (or any dress would do if you don't have a jumper) and trace it, minus the arms.  And then I just swooped my tracing down to omit one shoulder altogether.  And then it was just sewing down each side in a straight line, and sewing that shoulder strap.  Finally, just cut the bottom all zig-zaggy and uneven.  That's it! 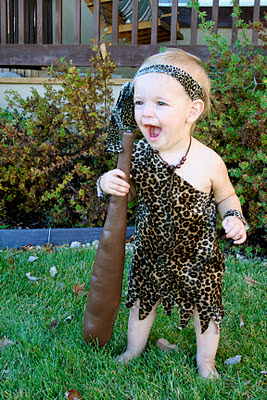 Of course, I did sew the arm hole shut on my first attempt, but we don't need to talk about that. 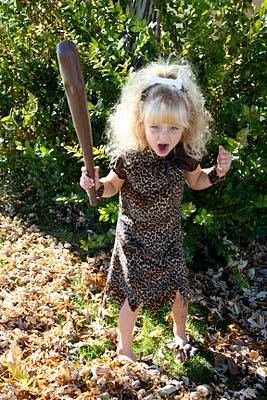 Seriously, so easy to make that even a caveman could do it.  C'mon.  You knew that was coming! 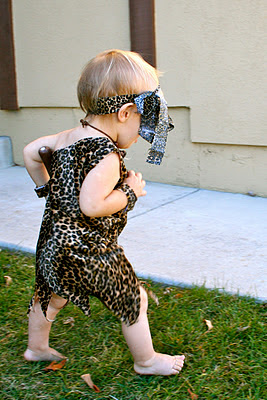 The necklaces were a cinch to make too.  The wooden beads and plastic bear claw beads are all in the jewelry aisle of Hobby Lobby.  A few of those and a leather string (same aisle) and VOILA!  Cave girl necklace!  Oh, and strips of fabric velcroed around their wrists and ankles for more accessories. 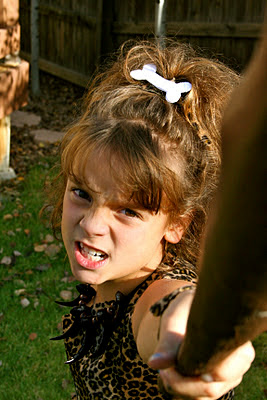 The bones in their hair are just cut from white cardstock and glued to a strip of fabric.  Easy peasy. 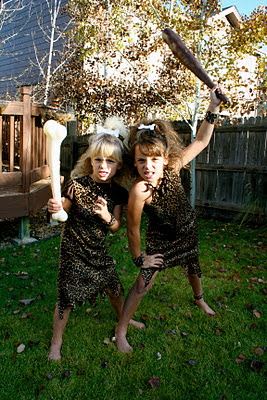 They insisted on going barefoot for trick-or-treating (never mind that it was a balmy 40 degrees here in Colorado on Halloween night...), but school required shoes.  I just tied a bunch of fabric strips onto their flip flops for that. 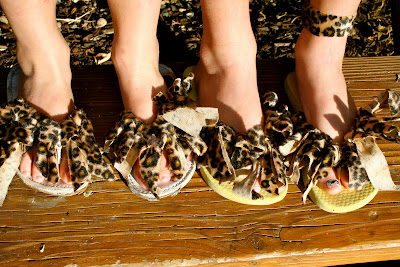 I think their hair was actually the best part of the costume.  We put their hair in just a few foam curlers the night before so we'd have some body to work with.  It was dry by morning, and then we ratted, ratted, RATTED their hair until it was big and crazy. 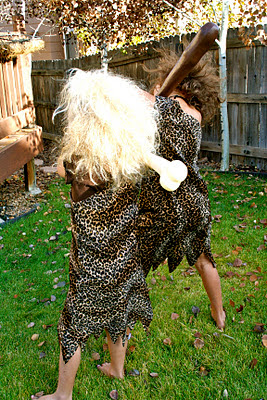 A little hairspray, a little more ratting, and soon we had perfectly coifed cavegirl hair.  Combing it out that night was a challenge, but HEY!  Nothing a pumpkin full of candy can't soothe, right? 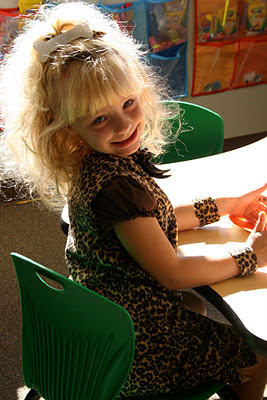 As far as our little dinosaur goes, his costume was given to us by some friends.  It was originally a dragon that looked like this. 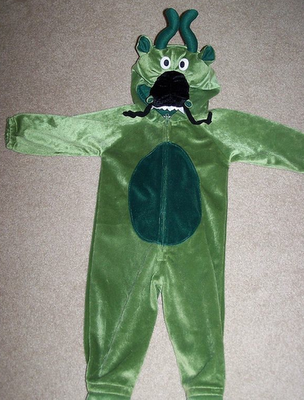 (I didn't take a picture before hand, so this photo is from eBay, but it's the same costume.)

I was fine with it, realizing that no one would notice that it was a dragon and not a dinosaur.  Fine... until I woke up on Halloween morning.  Suddenly, I NEEDED a DINOSAUR.  So with about an hour before we had to be at our first class party, our make-shift dinosaur was born.  I created a dinosaur face with felt and pinned it over the top of the dragon's face.  Nothing is glued on, so all I have to do is unpin it and we have a dragon once again. 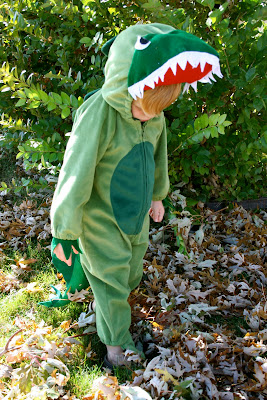 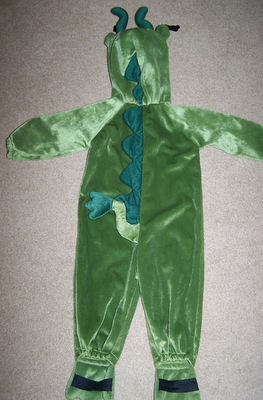 Brody was pretty concerned about the dinosaur having such a short tail, so I pieced together what felt I had laying around to make a dinosaur tail.  I fit it right over the dragon's tail, and a few safety pins later our dinosaur had a tail.  An imperfect tail, but a tail nonetheless.  And Brody was happy. 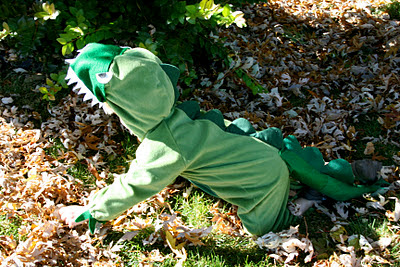 Happy Halloween from our cave to yours! 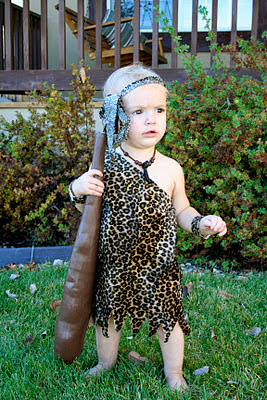 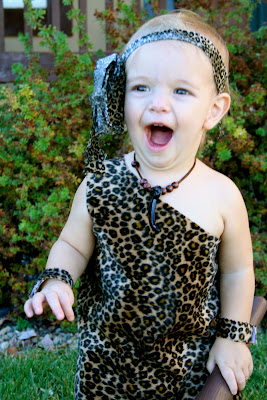 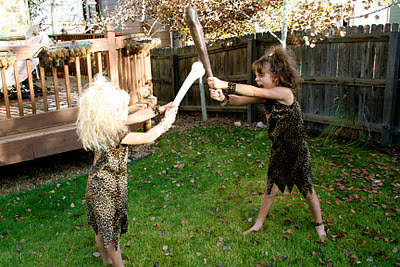 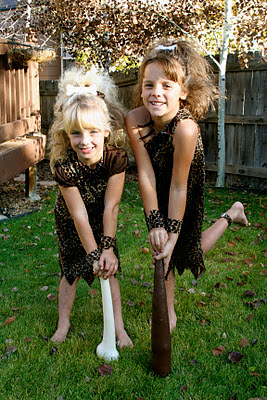 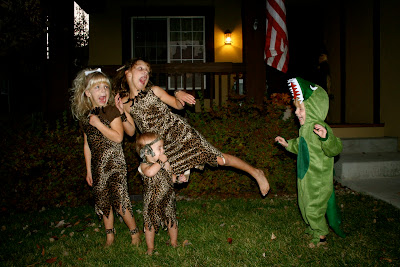 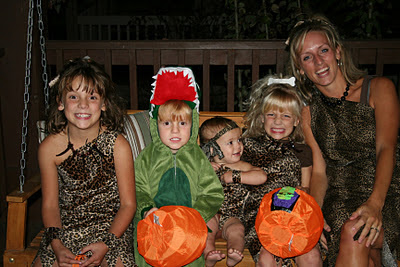