Don't you just envision you and your dream guy cruising around the island in a hot red mustang convertible, with the top down, and the ocean breeze whipping through your hair?  The sun beating down on you while you soak up the adventure and relaxation that is Kauai?

Or don't you at least envision zipping around the island in an economy car?  That awesome Ford Focus that was the cheapest thing to get off the lot?  I mean, hey - if it takes you from point A to point B, and in you're in HAWAII, does it really matter?  It's good on gas, it's easy to park... of course it doesn't matter.

Let me tell you a story.  And take notes if you plan to rent a car anytime soon.


Before we left for Kauai, I was giddy with excitement.  We'd booked our hotels, we'd booked our adventures, we'd dreamed about what we'd do.  We were set.  There was just one little "unknown" and we were even excited about that.  When we reserved our rental car, we opted for the...
MYSTERY CAR!
(...Mystery Car!  ... Mystery Car!  <---echos)
Orbitz told us that for just $1 more a day, we would get the "special" - we were promised the compact car or larger.  A mustang?  A jeep?  What would it be?!  Worst case scenario told us we'd get the compact car - a Ford Focus.  If it was good enough for the American Idols, it was good enough for us!

So as I waited for Gary to pull up and pick me up at the airport curb (he picked up the car while I picked up the luggage), I anxiously watched for our car.

I waited.  Finally, my wait was over.  Lumbering toward me was a silver beast, with Gary behind the wheel.  Suddenly, I had flashbacks.

You need to know that I drove this baby in high school:

A 1981 Mercury Grand Marquis.  Don't be jealous.  It might've been awesome had it been 1981 when I went to high school.  Actually, no.  It probably still wouldn't have been awesome.  And it still wasn't awesome 15 years later when I got to drive it into the school parking lot.  I know you might think that this car probably boosted me to instant popularity, but you are wrong.

So when Gary drove up in this beauty, a two-thousand-something Mercury Grand Marquis--

--I thought to myself, "Sweeeet ride!"

No.  No, I didn't think that.  Don't get me wrong, I'm not that picky about cars, and more than anything I was thankful to be in Hawaii.  But driving my grandparents' car around the island?  Really?

Gary was on the same page.  I got in the car and he was fuming.  (It was actually very funny.)  He kept ranting, "I paid an extra $1 a day for THIS?!"  We went back to the car rental place and explained that surely there must have been some confusion.  They explained that no, this is what we get.

We learned that when you sign up for the "special" deal, you get the leftovers on the lot.  They'll rent you whatever cars haven't been reserved or rented already - the ones they can't get rid of.  So until Grand Marquis are in high demand, this is what you'll get.  There were approximately 137 of them sitting in the lot.

So we were bummed.  For less money, we could've gotten a smaller, more economical car.  So much for throwing the dice and hoping our mystery car would be something fun and exciting.  I mean, here's an interesting fact:  the Grand Marquis is 10" longer than the minivan we drive at home (our Honda Odyssey measures 202.9" vs. 212")!!  WHAT?!

And, I admit that we were secretly jealous of our friends who were arriving the next day who would probably luck out and get the convertible after all.  But guess what?  That's right, there were two Grand Marquis cruising around the island last month.

THEY GOT ONE TOO.  We've never laughed so hard.

When given lemons, make lemonade, right?  With two monstrous boats at our disposal, what else were we to do but a photo shoot? 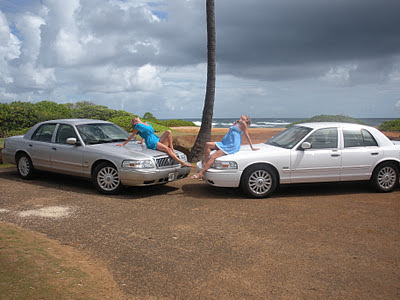 I know that Kim and I make you want to rent one. 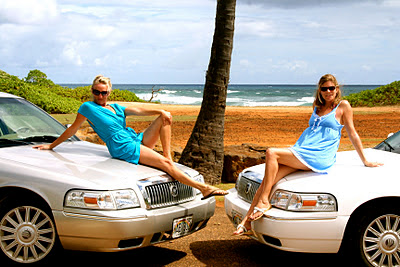 After seeing these, forget renting.  You probably want to go out and buy your very own, huh? 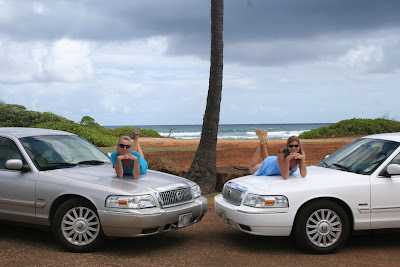 We're just paving the way for that Orbitz Special to run them out of these Marquis.  We make them look goooood. 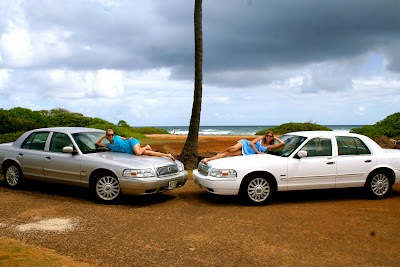 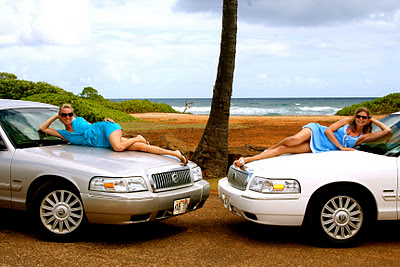 And also?  We squeezed the six of us into one of these cars.  And when I say, "squeezed," I actually mean we had ample room.  Take THAT, you stinkin' convertible. 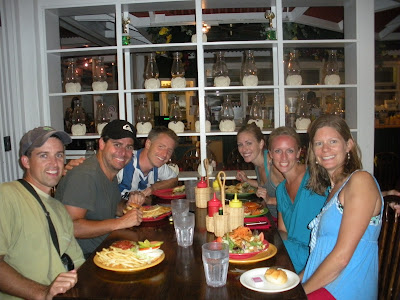