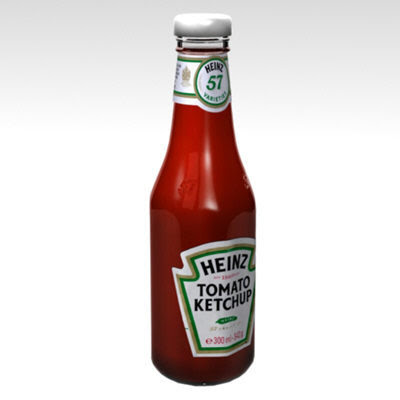 And we're back, with an exciting episode of Ketchup Time. (Volume 1 was waaay back in February in case you want to read it. Riveting stuff.)

Speaking of ketchup, does anyone really spell it "catsup?" I certainly don't. And if you do, do you pronounce it CAT-SUP? Because that's just kind of weird. I don't generally like to think of cats and ketchup together, and when I see it spelled that way, I do. And I also immediately switch the syllables and in my mind, I say, " 'sup, Cat?", as in, "What is happening, feline?" But the weird thing is, I don't have a cat, and wouldn't talk to it like that if I did.

And speaking of cats... a friend told me yesterday that she was staying at a friend's house a few weeks ago. Her friend owns a sick cat who gets to drink milk up on the counter. (Eww #1.) It sits on the dish towel for "padding" while it does this. (Eww #2.) And then she watched the friend dry the dishes later with the very same towel. (Eww #3.)

Okay, enough of that. My mind works in mysterious ways, and I don't really expect that anyone followed that or thought it was interesting. Just typing out loud.

I gasped out loud (GOL?) when I saw that my last post was November 20th. Yowza! Life has been fun and full, although a drag at times with sick kids and a sick hubby. I cringe when the first person gets sick, because you know those germs are just recycled until about April when it seems like everyone in the family is healthy again, all at the same time. 'Tis the season! 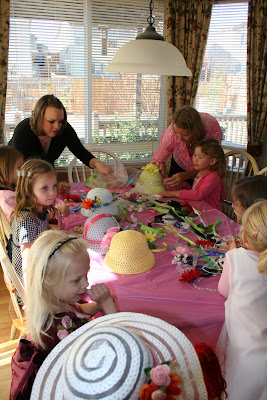 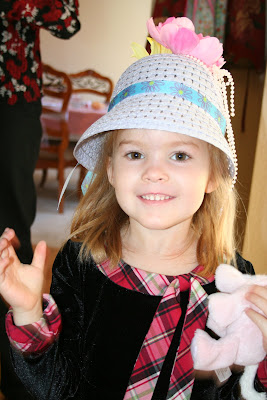 Of course every little girl needs a feather boa! 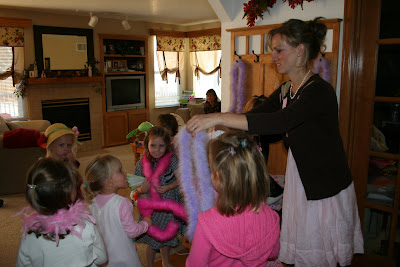 Look at all the little lovelies! 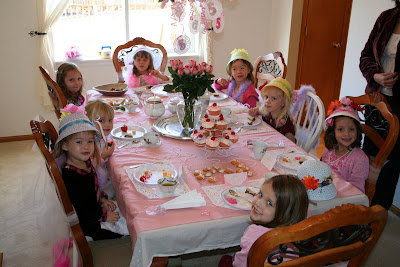 I love this picture of Emma's friend, K. (So cute, Deann!) 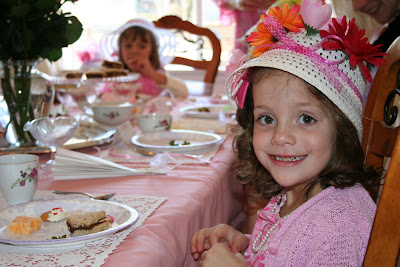 Trying hard to get that pinky up! I hit thrift shops before the party and bought tea cups for all the girls to keep as party favors, along with their hats, fans and boas. So fun! 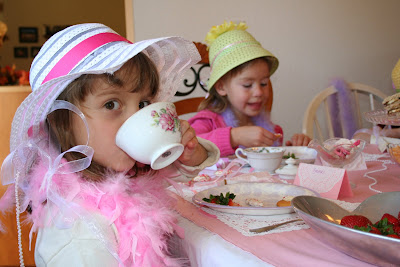 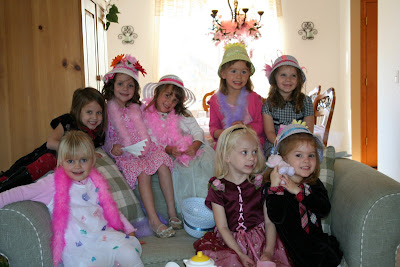 We also played musical chairs and had a sugar cube relay (which didn't work out as well as I'd hoped...) and read a story about a girl who had a tea party. It was a sweet morning. I'd been a little apprehensive about one thing, which turned out wonderfully; on the invitation we requested no gifts. We figured, it's a busy time of year, a bad time for many people financially, and mostly, we wanted Emma to recognize that a birthday celebration doesn't necessarily mean we get more "stuff." We weren't sure how she'd respond, but being that this was her first birthday party with friends, she didn't have any expectations. Instead, her friends all brought her hand-made cards. She absolutely LOVED them. Before the end of the day, she had me read each of them to her again at least five times, and they were by her side the rest of the weekend. I'm sure new toys would've been forgotten in no time, but these cards are TREASURES to her. We may have stumbled across a new birthday tradition...

Thanksgiving was a fun night, even though it seems my girls were on fast-forward all evening. My goodness. They were SO wound up. I don't suppose the cinnamon rolls for breakfast, snacks for lunch, the pumpkin pie, and pilgrim hat craft project with Grandma had anything to do with it... 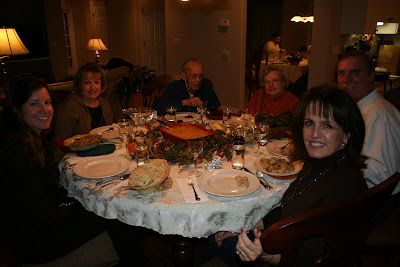 The "kid" table... which has outgrown the adult table and is WAY more fun, anyway. 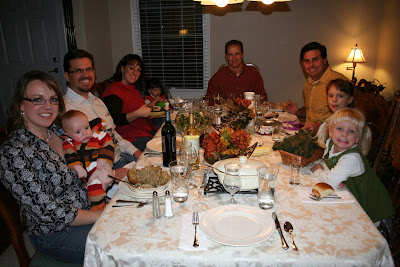 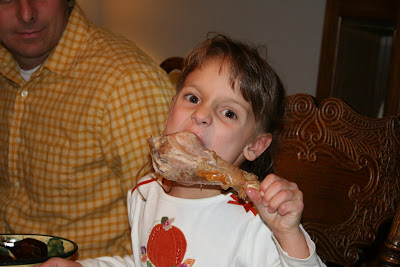 Aunt Amy and Kenzie with Brody and Addie (who would NOT smile). 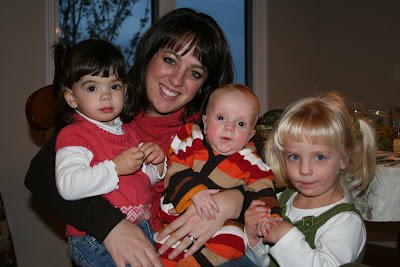 My mom had a fun Thanksgiving craft for the girls to do. We made pilgrim hats with cookies, a dab of frosting, a Rolo or Reece's Peanut Butter Cup and an orange Tic-Tac. They were so fun and easy and so cute! The girls loved making them... even if we all paid for the sugar high all. night. long. Even Kenzie ate more than her share! 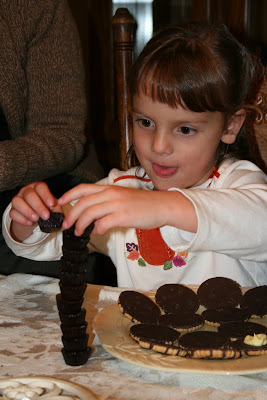 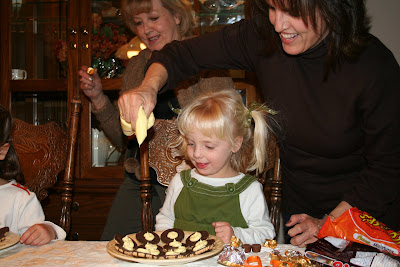 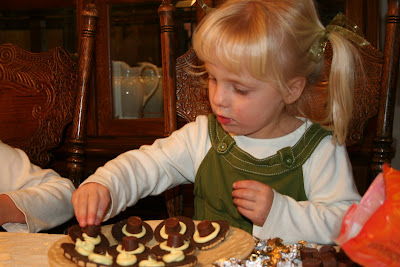 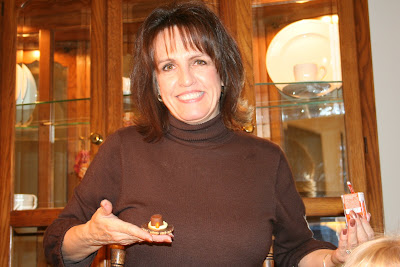 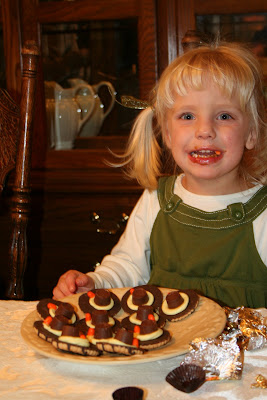 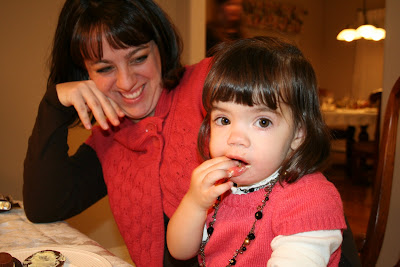 The girls LOVED playing in the first real snowfall of the season... November 29th! Can you believe it?! Colorado's weather has been unreal this fall. 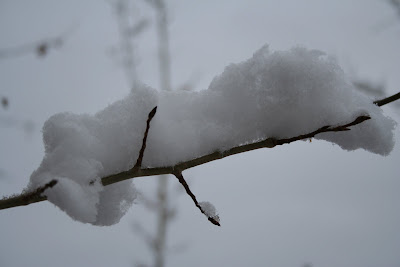 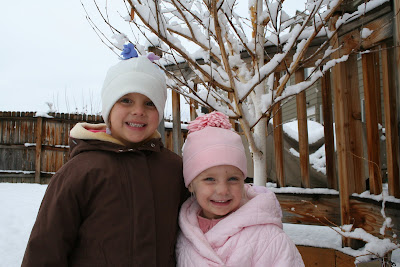 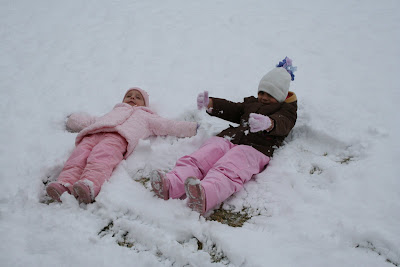 Other highlights of the last couple of weeks:
And of course, Brody's been growing and growing. He's just so fun. He's smiley and happy and giggly and just cute as can be. And he's never short on a little lovin' from his older sisters. 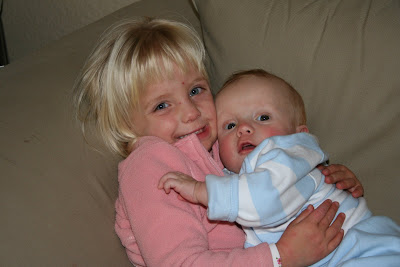 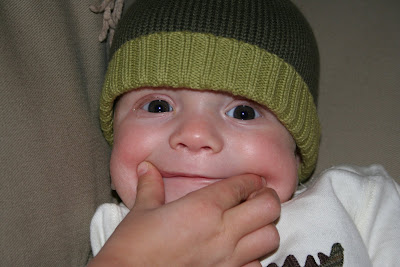 Because Brody likes this position... 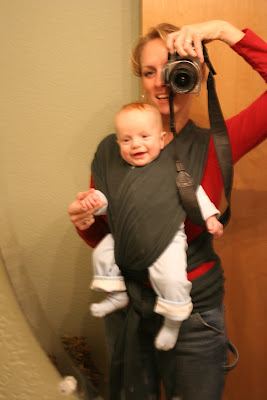 ...and KNOWS when I sit down (seriously... how do they know?!), my computer time comes in short spurts. But I have lots of blog posts rolling around in my head, and exponentially more to catch up in my Reader. I've said it before, but have never had the guts: I might have to mark them all as read and start over. It's too overwhelming! There is one blog I subscribe to that posts at least 10 times a day! WHO DOES THAT?! I need to simplify. The bad part is, I save some of my favorites to read until last, so those numbers are mounting like crazy. Kelly, Joanne, Meredith... I'm far into the double digits of unread posts with you guys. Someday I'll resurface in your comments... someday.

Okay. I'm done. The Ketchup bottle is empty. Funny post coming tomorrow. I promise it will make you laugh.
Posted by Angie @ Flibbertigibberish on 12/11/2008