Snowdays, Scarecrow (and friends) on Saturday and Sunday Scare

A quick recap of recent events:

Like, at least 18 inches a lot. The girls' school was even canceled on Thursday. Would you believe I don't have a single picture of the snow storm? What was I thinking? Oh! I remember. I was thinking that my kids didn't get to play in it since Emma left her coat on the bus and outgrew her boots, and since Addie was sick and I didn't want her getting sicker, and since Brody didn't have any snow gear. Was I heartbroken that my kids didn't get to play in the snow? No. There will be more snow. Ohhhhh yes, there will be more snow. 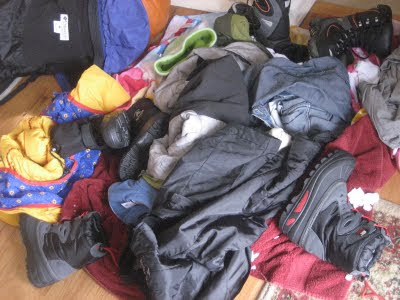 And the above picture (stolen from Mer's blog), reminds me of why it's just fine that we didn't play in the snow. As soon as I saw it on her blog I felt totally at peace with my decision to keep the kids in for hot chocolate and "puzzlepalooza" instead. I really, really don't like the aftermath of playing in the snow! (Bah-humbug, huh?!) 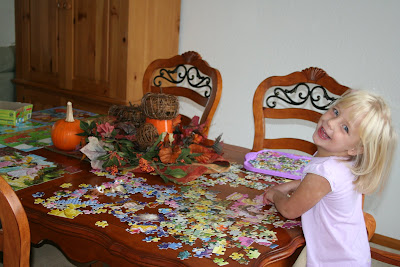 We had a little Wizard of Oz trio for Halloween this year and made a day of the Harvest Festival at church and trick-or-treating in our neighborhood. Brody got the hang of it quickly and proudly toddled to the door and back with his treasured piece of candy at each house. It was adorable. (And no, he won't be eating a single bite of any of it!) 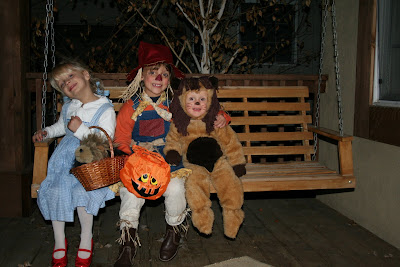 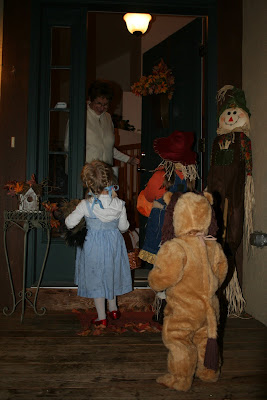 Oh! But first, Emma helped me make her scarecrow costume. She cut out all the patches and together we converted the overalls to a little dress, added the ruffle, altered a huge shirt, made bloomers and made a hat. We love how it turned out! She felt so important that she got to help with it. The girls fought over who would be Dorothy, but when Emma found out the Scarecrow would get to wear face paint, she was SOLD. 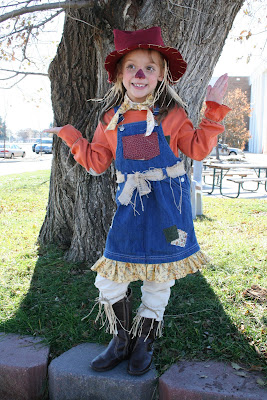 Finally, yesterday morning we were getting ready for church when the fire alarm in our house went off. Three things went through my mind all at once: 1) Is there really a fire? (I checked) Whew! There isn't. 2) It would've been funny (kind of) to call 911 since Emma and Brody each called them once last week... okay, not funny 3) WHERE'S EMMA?!

Emma is TERRIFIED of alarms. She won't let anyone near the buttons in an elevator for fear they'll push the alarm button. I had just slipped Emma's dress over her head when the alarm went off, and she bolted. We had just finished bath time, so Addie was naked, Brody had just been dressed, I was in my jammies, and Gary's mom (who was visiting this weekend) was wrapped in a towel after getting out of the shower. So it's a good thing there really wasn't a fire!

But I had to go search for Emma. I found her standing against the back fence in bare feet in freezing weather, crying. I finally lured her back inside (the alarms were still going because I couldn't get them to stop!!) and she ran from the back door, through the house and out the front door! Suddenly the alarms stopped and I went out (yes, still in my jammies) to find Emma on the corner, three doors down. That girl!

Oh... and all that snow? GONE. It was a gorgeous day yesterday, with hardly a trace of the snow that blanketed the yard just two days before. It'll be in the 60's with beautiful sunshine all week. Gotta love Colorado!
Posted by Angie @ Flibbertigibberish on 11/02/2009