We had good times together, you and I. Remember the time you and Pink and Pretty Barbie went to the dance and I accompanied you, making authentic smooching sounds every time you kissed? Or the time you drove her in the Barbie car to the giant Barbie mall and waited while she shopped? What a patient man doll you were, Ken.

I'm writing this letter to thank you for being patient once again. I understand now, why when I was younger my mom would only let us play (and I use that term loosely) with her childhood Barbie doll under close supervision and for only 2 minute increments before she swooped down and gathered it all up so our mere breathing wouldn't tarnish her.

When I handed you over to my girls to play with, I assumed you would at least stay in the less-than-pristine condition that you started with. I should've learned my lesson when they snapped the head off of poor, unassuming Pink and Pretty Barbie. Sure, you may have been missing some toes that my dog chewed off, but you were still a handsome guy. I can see what Barbie sees in you. It amazes me that after all you've been through, you continue to flash that winning smile. 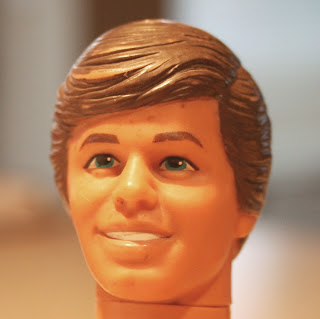 I am sorry that when the girls left you out in the snowstorm two weeks ago and you were buried under two feet of snow, that we could not hear your unnaturally white teeth chattering. How cold you must have been without a shirt and only your linen pants to keep you warm. And not even Barbie was within reach for added warmth.

And when Addie brought you in and showed me how dirty you'd become in your absence, you never cringed when I sighed and just asked her to put you on the counter so I could clean you later. Minutes later, Tinkerbell was brought in from the tundra so that she too could be cleaned. Were you together? Does Barbie know? 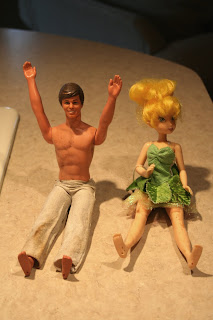 A few minutes later when I walked back into the kitchen to restore your dignity, I couldn't believe my eyes.

A slug was creeping out of your pants.

A real slug. A black, gooey, disgusting slug. It was leaving a clear, gummy trail behind it. I watched it that long? Oh yes. I did. I was frozen with shock and terror.

Ken, I'm so sorry. So, so sorry. It shouldn't have come to this. I've mistreated you.

And yet, you continue to smile. 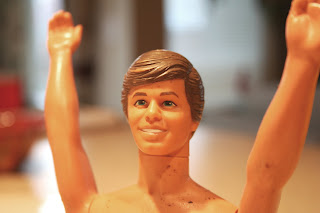 Even when I told the Facebook world what had gone down in my kitchen, you never blinked an eye.

"Angie Olson Osborne is not happy that her girls left her childhood Ken doll in the backyard for last week's snow storm and just brought him in to me, all dirty and yucky. What makes me less happy is that a slug crawled out of his pants and on to my kitchen counter. That is just all kinds of gross."

Some of the comments:
Come on, Ken. The comments from my friends were funny. Right?

Well, at least you're still smiling. 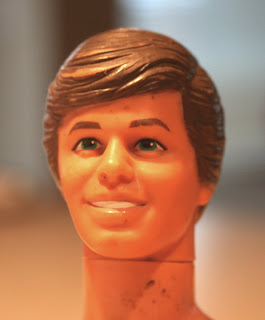