I can't let November slip away without blogging about Emma's sixth birthday party... which took place in early November! So with hours to spare...

Emma wanted a Chuck E. Cheese party this year. As much as I wanted to give her the gift of swine flu, I was able to talk her out of it. After much deliberation, we came up with the idea of having an Artist Birthday Party! 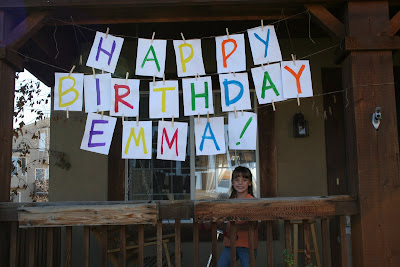 She painted a birthday picture which we copied off and mounted on cardstock. We made the invitations together, so she felt included right from the start! 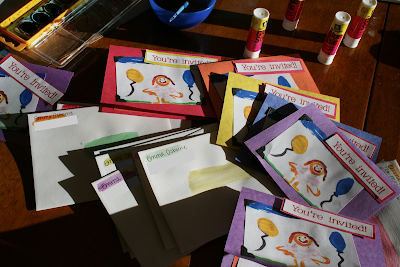 Emma wrote a welcome note on the easel out front to greet her guests.  Upon arrival, each artist got an apron with their name on it. Their own blank canvas, if you will. 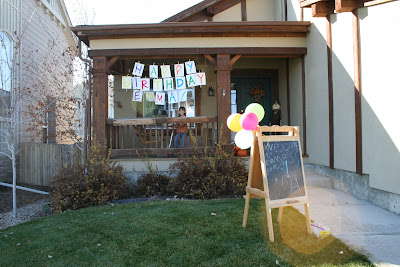 As the artists came in, they joined in painting a birthday mural for Emma.
We meant to have them each sign it, but forgot!

After that, they took some time watercoloring some masterpieces of their own. 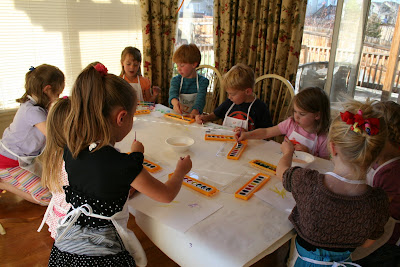 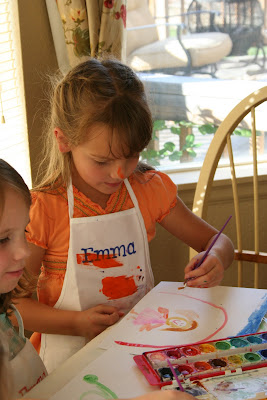 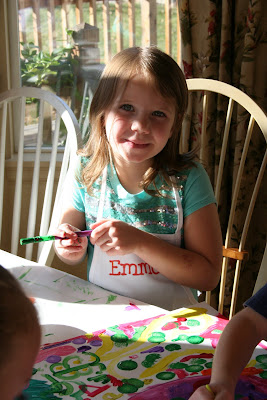 When they were finished with that, we had two different stations for them to experiment with. The first was a spin art station.

I bought a cheat salad spinner at Walmart and cut out different colored circles that fit just perfectly in the bottom of it.  Then, I put a put tempera paints in condiment squeeze bottles.   Gary helped them squeeze different colors into the salad spinner. After a few pumps, the paint sprawled in all directions and the kids had their own unique piece of art!

The other station was marble art. They got to dip marbles in different colors, drop it in a shallow box onto their paper, and roll it around to make another masterpiece. Every creation was unique!

Please note the lack of kids in this picture. Oh. My. Gosh. This station? A disaster. Fun, but messy. Messy, messy, messy. It is impossible to take pictures while retaining any hope that your curtains will not be splatter-painted.

Looking back, it might have been wise to put something behind it, but I think the red splotches add character to our siding.

After that we played "Rainbow Relay" where each team did a relay race to paint each stripe of the rainbow. What a hit!

The party concluded with gifts and an Artist Palette Cake.

My favorite part of the entire party was kind of a splurge, but totally worth it. The rest of the party cost next to nothing since we had all of the materials on hand. But to give the kiddos a unique party favor, we hired a caricature artist to come draw each of the kids.

She was AMAZING. She was so good with the kids (who held remarkably still for five minutes each!) and their pictures each turned out better than I'd imagined. And I think they LOVED seeing themselves drawn. We can't wait to frame and hang the girls' pictures in their rooms.

We found our artist on Craig's List, but you could definitely call an art student at a local college.  They'd probably love the practice!

I promised I'd give her a shout out, so if you're in the Denver area and want something fun and unique for your kid's party, HIRE HER! I was so impressed. Her name is Sarah Bergman and her phone number is 720-226-1751. Or email her at sarahb0914@gmail.com.

By the end of the party, all of the afternoon's masterpieces had been hung on the porch to dry and greet parents as they arrived. We had been BUSY but we sure had fun and celebrated hard. 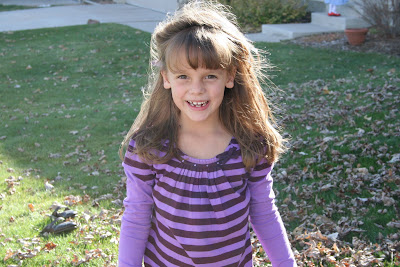 I love you, Emma!
Happy 6th birthday, my sweet girl!