There's an additional beloved member of my extended family who has never been spoken of before on this blog.

He has nicknames (ohhh does he have nicknames), but mostly he goes by "Santa." 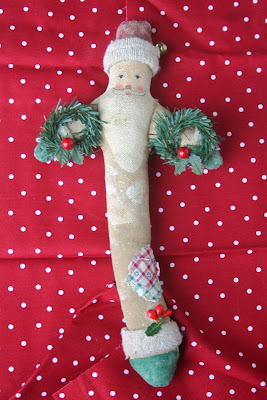 Santa first joined our family about 15 years ago when he was given as part of a gift exchange at my parents' Bible Study Christmas party.  We immediately were drawn to his... um... shapely appearance and bushy wreaths.  There's something different about this Santa... something I just can't put my finger on...

AND ALSO,
Who gives this at a Bible Study Christmas party?!??!!
Were they serious or was it a joke?
Did they think it would add a nice touch to someone's Christmas decor?
And what on earth does Mrs. Claus look like?
To this day, we don't know who the giver was, we just know that we love them.

Santa has caused quite a raucous over the years and we've gotten many a laugh at his expense. He makes surprise appearances throughout the year when my mom and I stash him in unexpected places to be discovered by the other.

After unknowingly taking him home from the Christmas celebration last December, and discovering him as I unpacked my bags, Santa spent the last six months at my house.  My mom never exactly knew if he was here or there, she just knew that sooner or later Santa would reappear.

And so thanks to a 4th of July celebration at her house last night, Santa has been joyfully reunited with my Mom.  It's Christmas in July, Mom!

Upon discovering Old Saint "Richard" nestled in the toilet paper, she sent me this poem:

‘Twas The Day After July 4th
by Kim Olson
‘Twas the day after the Fourth and what would I do?
But clean up from our party, starting out in the loo.
I emptied waste baskets and laundered the towels,
Replenishing toilet paper while moving my bowels.

As I reached for a new roll, there where I sat,
I thought to myself, What!? She’s gotten me back!
‘Cuz St. Nick reappeared looking right at my hiney,
I sat there and laughed, as I was just stymied.

He was perched in a new roll, in a bin on the wall,
Hoping someone would find him when nature would call.
Angie had to know… it would be me that would glean,
After all, it’s been months since he has been seen.

As I continued to clean, going about my day,
I left St. Nick there so I could show him to Ray.
I don’t think I’ll warn him when nature may call,
Knowing full well, he might pee on the wall.

Oh say, can you see, what fun St. Nick’s bringing?
Was he already hidden as we were all singing?
I wonder who placed him, and who was in charge?
Was it Gary, running back in after loading the car?

I guess it doesn’t matter as long as he’s safe,
Where he ends up is just a matter of taste.
But in the loo… seriously? Surely you jest,
One thing’s for sure, I was at my best.

Who knows where YOU will find him next,
You’ll know soon enough, and that’s a threat.
He’s ‘bound’ to turn ‘up’ without any strife,
But be forewarned, you may need a knife.

In your hunt he could be high,
In your search he could be low,
Just keep your eye out and don’t contemplate it,
You’ll have plenty of time if you’re constipated.

Another 4th has come and gone,
When again will we see everyone?
‘Guess we’ll just have to try to behave,
In the land of the free and the home of the brave. 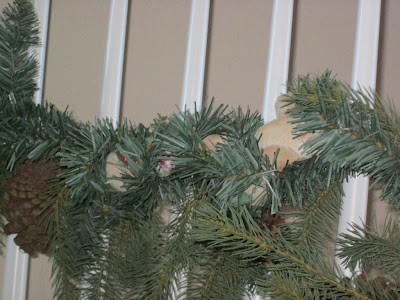 'Twas two weeks after Christmas, when all through the house,
Not a creature was stirring, not even a mouse.
The stockings were still hung by the chimney with care,
In hopes that the Olson’s would remove them from there.

Their kids in their own homes were doing the same,
Putting away decorations…it all looks so plain!
With mom in the house and dad in the yard,
Both were busy packing so it wouldn’t be so hard.

When up on the balcony mom burst into laughter,
Dad came running in to see what was the matter.
As Mom unfurled her garland to show Dad her find,
They thought to themselves, Angie’s out of her mind!

So that’s where Santa went, they thought to themselves,
‘Can’t wait to hide him next year on one of her shelves.
Away to the phone mom flew like a flash,
As she tore down more garland to add to her stash.

She thought to call Angie, to tell her the news,
But found herself laughing, about the ruse.
What fun we have with Santa, all at his expense,
We never know who got him last, or how, to what extent.

It’s fun to play this silly game, with those who are just as sneaky
The scheming and tom-foolery could cause one to take-a-leaky.
Mom’s surprised she didn’t catch you when she saw your hiding place,
She spoke and looked right at you girls, atop her grand staircase.

Santa may not look the same, when you see him next,
He lacks a little detail that leaves him a bit perplexed.*
Mom thought it best to add to him to make him feel complete,
So she’s going to add a wreath or two just above his ‘feet’.

I know you’ll miss poor Santa for another year,
‘Just know he’s taken care of until we meet my dear!


*After many years of man-handling, Santa had lost his "wreaths"... 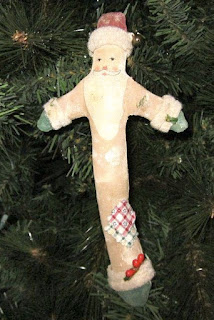 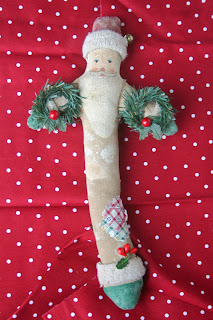 and so my Mom touched him up and adjusted him a bit... so to speak.

How funny is my Mom?!
Stay tuned for when Santa pops up again!
Posted by Angie @ Flibbertigibberish on 7/05/2012