I Don't Do Numbers

Suggest a book to me, and I'll probably read it.  Personal book suggestions go far with me.

So when Emma's 1st grade teacher recommended The Ninth Wife as school let out in May, I took note.  She said that she doesn't like to read (um, what?  All teachers don't like to read?), but that it was the first book that she really liked and it kept her attention.  Sounded worthwhile to me!

One day I went to Costco to pick up some bread (hello, Oroweat bread?  Super-duper cheap at Costco.  I feel like I'm selling my soul when I have to cave and buy it at the grocery store).  But as I approached the book aisle, the warm smell of the pages lured me in and I soon found myself perusing the new releases. 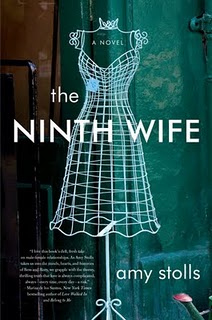 Little did I know that little Brody had snuck in another book - The Ape House.  Why?  Because there are monkeys on the cover and "Mommy, I like ooo-ooo aaah-aaahs!"  Had I noticed when I was checking out, I would've not bought it.  A book about monkeys?  Please.  But it's funny how four kids can distract you when you're just trying to buy a few things at Costco or anytime you need any concentration to do anything, anywhere.  So now The Ape House is sitting on my bookshelf waiting to be read.  I'll keep you posted, but I'm not anxious to read it.

Anyway, I was about 3/4 of the way through The Ninth Wife when a friend mentioned the book she's reading: The 19th Wife.


WAIT.  The 19th Wife?  As in, ten after The Ninth Wife?  I've never been good with numbers, but had I gotten it that wrong?

Yes.  Yes, I had.  I emailed her teacher who confirmed that indeed the book she suggested was The 19th Wife.  Oohhhhhh.  Okay.

Anyway, despite The Ninth Wife NOT being the book I was supposed to read, and despite it being fairly mediocre, I finished it.

So then I went to the library and checked out The 19th Wife, because heaven forbid I go to Costco to get it and random books about monkeys hijack my cart.

Right now I'm on page 77.  As stubborn as I am about finishing books I start, I'm not convinced I'm loving this one.  I didn't know what either fiction book was really about until I cracked them open.  Unlike The Ninth Wife, which was about marrying someone who had been married eight times already, The 19th Wife is about polygamy, which doesn't really do it for me.  It's interesting, but I'm itching to get started on the other books in my stack.  Like The Ape House and Crime and Punishment.  *sigh*

So -- have any of you read The 19th Wife?  Is it worth finishing?  Are there any other books with numbers in the titles that I must read?

UPDATE!
My friend Michelle was in the midst of this book and scurried through it in the days after I published this post.  Because of her not-so-rave review, I have... (breathe)... abandoned this book!  (GASP!)  She gave me a spoiler so I know whodunnit, but it just didn't seem to  be a worthy read.  And actually, I feel pretty good about it.  On to the next book!
Posted by Angie @ Flibbertigibberish on 9/16/2011