So my sister and I got in a "fight" on Thanksgiving Day while watching the Macy's Parade together over the phone. (No, that's NOT the geek alert part.) I say "fight", but it's important to know that I was laughing when I got off the phone with her, but I think she was quite serious about it. In a nutshell, I hung up on her (in jest!) when she called me a band geek (hello, I was in band like 12 years ago), and then she was furious that I would hang up on her, kidding or not. Everything was fine and dandy when we saw each other later that day, but apparently, I am (or was) a band geek.

I've been dying to play my flute lately. Maybe it's the Nutcracker music I have playing through my house 24/7. I went online to see if they had music I could buy. I'd love to pull that dusty old flute case out from under my bed and play a tune. I remember how, and I'm itching to do it. Does this make me a geek?

If I do it, I promise I won't geek out like I did in this lovely photo from back in "the day." 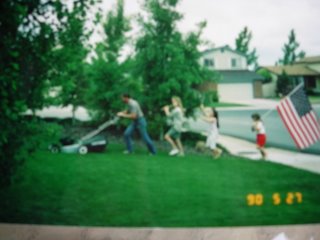 Okay, it's a little hard to see. That's my dad mowing the lawn, me playing my flute, my sister Amy "directing" me with a baton (despite the fact she's BEHIND me), and Abby waving the huge flag in back. What a riot!


If that's too hard to see, how about this one? 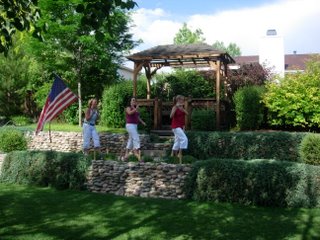 Same order (minus dad - he took the picture!), but fast forward about 13 years! Yes, we're having a 4th of July parade in the backyard. This time, I'm pregnant. Yep, that's still Abby in the back. NOW who's a geek?!?!?

Well, geek or not, it might be time to whip out my flute. I'm longing to play some Christmas songs!
Posted by Angie @ Flibbertigibberish on 12/05/2006