When you can't help but laugh

I'm typing this as Tinkerbell and Rina (that's Ballerina) flutter and prance around the house. My back is to them, but I hear their giggles, and occasionally silence, which is a little nerve-wracking, especially when it's followed by fits of laughter. But we had a nice, quiet PB&J lunch together, so I'm hoping they use up all their energy before it's naptime. What? You don't believe that I was honored enough to dine with such distinguished guests today? The proof is on their faces: 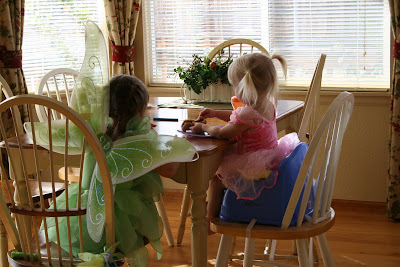 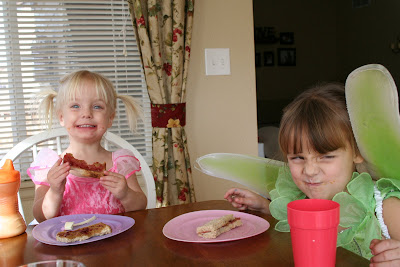 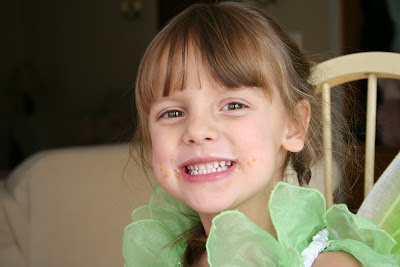 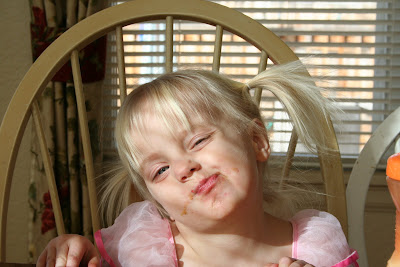 These two silly girls totally wear me out (WHERE do they get their energy?!), but I'm so thankful for them. I think getting through the last four months might've been a trillion times harder if they weren't around to cheer me up and lighten the mood. There are a hundred examples I could give, but one keeps recurring every week. And if you laugh at it, it's okay. I laugh too.

At least twice during the week we drive to the church for MOPS or Bible Study or something, and the cemetery where Joshua is buried is right across the street. Sometimes, I'll drive through the cemetery to get to the church, and take a route that takes us right near his resting place. For the longest time the girls were oblivious to it (thankfully), and it was just kind of "my thing." But one day, it occurred to Emma what this place was. Granted, I never stopped or said anything, but she's a smart girl. I don't know what triggered it for her, but one day she said, "This is where baby Joshua died."

I had to explain to her, in the simplest of terms, that no, he didn't die there. I explained that he died in my tummy, but we buried his body there, and God came and took him to heaven. (How do you explain that to a 4 year old?) She seemed to understand, and the ensuing conversation centered around that we would die someday and go to heaven and see Joshua and Jesus.

Since then, we can't drive through or even pass the cemetery without a conversation about dying, heaven, Jesus, baby Joshua, balloons (we floated balloons up to Joshua the day we buried him), my tummy, seeing friends in heaven, getting old, playing with Joshua... the topics are endless, and it surprises me what she comes up with. There are days I wish there were another way to the church, but going by the cemetery is inevitable. At least twice a week. *sigh*

It used to be hard for me when she'd ask questions, but I've learned to brace myself and take it with a grain of salt. I always wait for her (or Addie) to lead the conversation, but more often than not lately, our talks are a source of joy rather than sorrow.

The funniest part is always after Emma states, "Baby Joshua is in the grass/under the ground/dead in the dirt (!)" (it's okay if you're stunned - I was too, but then I had to laugh at how her little mind puts things together), and then Addie follows up with, "Baby Jesus died." Oh, how I laugh! I know it's not funny! But you have to hear the sad voice and see the pouty lip that goes with it! This new contribution to our conversations began around Christmas time, and I think with all of our Christmas story talk, Addie got a little confused. She ALWAYS chimes in with the fact that "Baby Jesus died." So then I explain in the simplest of terms... it's the same every time.

The other day we were driving through when Emma started talking about the pictures of baby Joshua. I was a little taken back because we've never shown her any of the pictures we took, or even told her that we took any. I asked what she meant, and she explained that the doctor (who we had just been to the week before) took pictures of Joshua in my tummy. "Oh, no, honey!" I exclaimed. I suddenly realized that she didn't understand. I sort of panicked without Gary there, but tried to tell her that after Joshua died in my tummy, we went to the hospital and the doctor took him out, and that we even got to hold him. And that now, God put a new baby in my tummy and the doctor took pictures of the new baby. I think she understood, but that was tricky. We often wonder when it will be right to show her pictures of the baby brother she never knew.

This new clarification got her thinking though, and driving past the cemetery this week she asked if the new baby was going to die too. I told her we would just have to ask God to let us keep this one forever.

Yesterday we drove through the cemetery because I wanted to see if Joshua's marker was in yet. IT WASN'T. We're getting a little (a lot) frustrated, since it was promised to be in before Christmas. It's almost like one more hurdle we're waiting to get past. I hopped out of the car quickly to see if it was in, and of course had to explain to the girls what I had just done because they were full of questions after my 10-second journey. I explained that we're waiting for the people to put in a sign that will have Joshua's name on it so we can remember him, and Emma asked, "Oh, like a sticker?" I laughed. Yes, Emma, like a REALLY EXPENSIVE sticker!

Our usual conversation about dying and heaven and Joshua was interrupted when Emma spotted a large pink casket that for some reason, was sitting all alone, waiting to be lowered into the ground. "Ooooo, mama! Look at that pink thing! It's pretty, what is it?!" Not wanting to have that conversation, I plead the fifth and kept driving.

She quickly forgot about it and told me that maybe Jesus just wanted Joshua more than we did. I'm not sure about that... but maybe... I started thinking about it, when Addie piped up with, "Baby Jesus died. Sad."

And I was back to laughing again.
Posted by Angie @ Flibbertigibberish on 1/16/2008