Today I played hooky and didn't go to Bible Study. (*gasp!*) I'm a little behind now, and playing catch up when it comes to Beth Moore isn't always an easy task, but the trade off was worth it!

I went down to Littleton to meet some bloggy friends! It was so fun. I was a little nervous, because I really didn't know most of them, and had only spoken to one on the phone a few times. I'm not generally a shy person, but that's only after you've gotten to know me. At first, I feel like I'm very shy and reserved and not myself. I'm working on it though. My sister Amy was supposed to come along, but woke up sick, so I was really on my own!

I realized at the end of my hour-long drive that I'd forgotten to bring along the directions to Joanne's house. I didn't figure it was a huge problem, because I could just look her up and mapquest her, right? Nope - unlisted. So, I hopped in my car after I dropped off the girls at my mom's house, and said to God, "Okay, Lord. Drive my car! I have no idea where I'm going!" The truth was, I had an idea, but really, it's a miracle that I drove straight there. I was surprised, but not really, because God's cool and does things like that. :)

Okay, so anyway, I met six new friends today and had the best time. Joanne served a delicious lunch and we lost track of time talking away the afternoon. I honestly felt like I was having lunch with old friends that I've known forever. I guess when you have a sisterhood in the Lord, friendship just comes naturally! 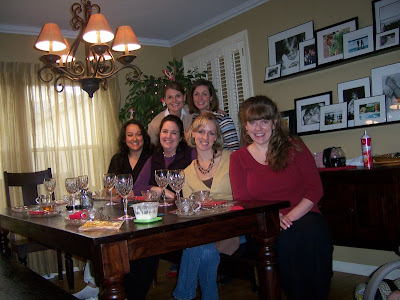 (Joanne, I took this from your blog. I hope that's okay!) In the back (L-R) is Joanne and Meredith. In the front (L-R) is Kate, Holly, me, and Kimberly. Kerry had to leave early, so she's not in the picture. (Photo taken by Meredith's daughter, Abbey!) 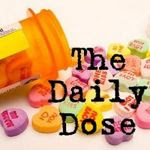 Amy... okay, yes, I go here everyday, but sista! Update your blog already!
Cheryl... a blog friend who feels like a "real life" friend.
Kathleen... my BFF since 3rd grade whose unique perspective on life ALWAYS has me in stitches. I might be bad at commenting, Sunny, but I stop by several times a day. I miss you!
Michelle... a best friend who might as well be a sister. I'd miss you even more if it weren't for your blog!

Okay girls, don't revel in the win for too long. You have to pass it along! (But if you don't, it's fine by me. I know how you feel about these silly blog things, Kath. *wink*)
Posted by Angie @ Flibbertigibberish on 1/30/2008